The purpose of this project was to identify how different winding patterns of composite tow affects the strength of interwoven joints, like those that exist in IsoTruss and other composite lattice structures. Three different winding configurations were analyzed to compare and determine how the pattern of carbon fiber strand layup would affect the strength of the joints on an IsoTruss member. 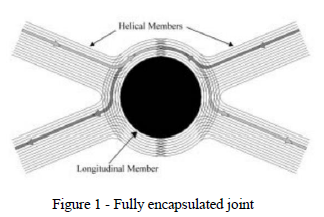 There are a few errors that could have occurred during manufacturing and testing. One error that may have occurred during manufacturing is that the consolidation pressure of each joint may have been different because the tows were consolidated by hand. An error that may have impacted the results was that the pucks fitted on each end of the test specimen may not have been perfectly perpendicular to the test sample, thus causing a bending moment during testing which would reduce the maximum stress that the test specimen could sustain.

The fully encapsulated joint gave the highest maximum stress when loaded in axial compression. If IsoTruss structures are being manufactured and used solely to be loaded in axial compression, it is recommended that the winding pattern used is a fully encapsulated joint. To further validate this conclusion, it is recommended that more tests are conducted with a larger sample population to compare the three different layup configurations. To minimize the errors listed above, automated manufacturing should be introduced into the testing process. By using automated manufacturing of the IsoTruss joints, the human error could be eliminated, and an even consolidation pressure could be applied throughout the manufacturing process. When fitting the testing pucks onto each test specimen, it is recommended that a fixture that will enable perpendicular placement of the pucks onto the end of the test specimens are used. From the results, it was found that the fully encapsulated joint is the best option for joints loaded axially in compression.