In cold regions like northern Utah, harsh winters can lead to decreases in the service life of concrete bridge decks. Chloride-based deicing salts, which are commonly used to remove snow and ice from the surface of concrete bridge decks during winter months, are of particular concern. Even in uncracked concrete, chloride ions can diffuse into the bridge deck and eventually lead to corrosion of the embedded reinforcing steel. When chlorides corrode the steel, expansive rust forms, which causes cracks to form in the deck. These cracks allow for greater chloride ingress, accelerating the corrosion and deterioration processes within the bridge deck.

Typical concrete bridge decks have two layers, or mats, of steel reinforcement. Deicing salts applied to the top surface of a bridge deck cause the chloride concentration at the upper mat to be of greater concern than that at the bottom mat. Thus, given the comparatively high cost of completely reconstructing a damaged deck, engineers have recently developed a rehabilitation process involving repair of just the upper half of an affected concrete bridge deck. The rehabilitation process involves removal of the concrete in the top half of the bridge deck using hydro-demolition, or the application of high-pressure water jets. New chloride-free concrete in then placed to bring the deck back to its original thickness, and an epoxy-based surface treatment can be applied to seal the bridge deck surface against further chloride ingress. While the top half of the deck is then free of chlorides, the bottom half of the deck may still contain significant chlorides and may be susceptible to further reinforcing steel corrosion. However, due to the presence of chloride-free concrete in the top half of the deck, chlorides in the bottom half begin diffusing upwards as equilibration of the chloride concentration is achieved.

The purpose of this project was to investigate the equilibration of chloride ions in concrete bridge decks rehabilitated using this new process. Through testing of numerous bridge decks, the BYU Materials and Pavements Research Group has determined typical monthly surface chloride concentrations and typical chloride ion diffusion coefficients for concrete decks under specific conditions. Combined with knowledge of the depth of hydro-demolition applied to a given bridge deck, these results facilitated numerical modeling to determine the chloride concentration with depth in the lower half of simulated bridge decks immediately before rehabilitation.

Numerical modeling was then used to predict the redistribution of the chloride ions within the deck after rehabilitation. Numerical modeling was used to simulate the effects of various bridge deck thicknesses, depths of reinforcement, and rehabilitation times. These simulations allowed evaluation of the extent to which hydro-demolition, placement of new concrete, and application of a surface treatment can theoretically prevent the chloride concentration at the bottom mat of reinforcement from exceeding the threshold value of 2 lb of chloride per cubic yard of concrete for a given combination of deck properties and rehabilitation timing. For the purposes of the numerical modeling, rehabilitation using hydro-demolition was assumed to remove concrete to a depth of 0.75 in. below the top mat of reinforcing steel. As an example of the results obtained in this research, Figure 1 shows chloride profiles for a bridge deck immediately before different rehabilitation times, assuming a No. 5 reinforcing bar, a 2.5-in. original cover depth (OCD), and an applied surface treatment. OCD refers to the depth of concrete over the top mat of reinforcement. 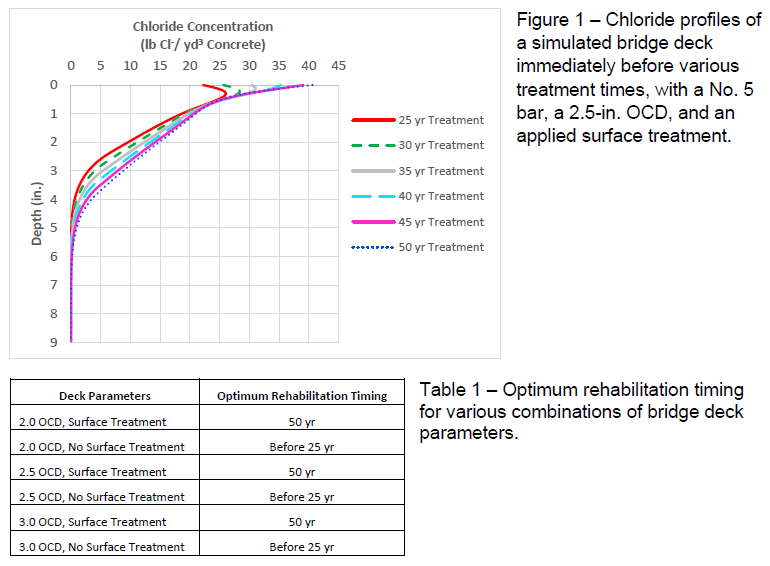