The objective of this project was to create, characterize, and optimize carbon nanotube (CNT) films as a surface functionalization strategy through modifying the growth, infiltration, and patterning during fabrication.

Carbon nanotubes have drawn attention in various disciplines in the scientific community because of their incredible strength, hardness, wettability (hydrophobicity), as well as their kinetic and electrical properties. At BYU specifically, they are being used in diverse applications including fabrication of superhydrophobic surfaces and interdigitated electrode biosensors.

Carbon nanotubes can be delicate with a diameter of only a few nanometers when grown. However, the process of carbon infiltration can be used to layer amorphous carbon on existing nanotubes. As the tubes become thicker, the number of contact points between tubes increases, resulting in a composite, referred to as CICNTs (carbon-infiltrated carbon nanotubes) that is stronger and has a higher thermal and electrical conductivity than carbon nanotubes alone. CNT diameter, contact angle, and sliding angle were examined for varying levels of infiltration to optimize the resulting surfaces for use in condensation heat transfer, creation of anti-microbial surfaces, and other engineering applications.

CICNTs were grown in three different patterns on alumina-coated silicon wafers: a forest of CICNTs grown uniformly coating the surface, a ribbed pattern, and in a pattern of posts. Standard photolithographic procedures were followed to create the various patterns. An iron layer of 7 nm was deposited on top of the photoresist. The CNTs were grown on the iron catalyst using carbon vapor deposition at 750˚C for 15 seconds and infiltrated at 900˚C for 0, 5, 10 or 15 minutes in a 1” glass tube passing through a Lindberg tube furnace. The vapor flow consisted of 373.6 sccm H2 and 204.0 sccm C2H4 for the growth step. Hydrogen flow was adjusted to 444.88 sccm for the infiltration step. Once the CNTs were grown and infiltrated, the devices were then vacuum annealed at -24 inHg and 250˚C to remove the absorbed oxygen; this reconfigures the surface structure of the CNTs to be superhydrophobic instead of hydrophilic.

The diameter of the infiltrated nanotubes was measured using images taken with a scanning electron microscope. For each image, the diameter of 20 different nanotubes was measured. Static contact angles were measured from images of a single drop of water on each surface taken using a high-definition camera with an uncertainty of +/- 3˚. Sliding angles, or the angle at which a stationary drop begins to move, were measured using a micrometer angle gauge. 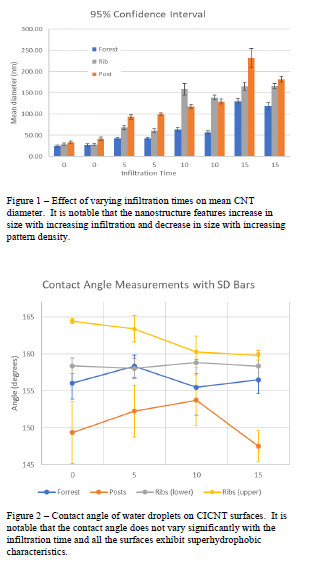 The mean diameter of the carbon nanotubes for each surface is shown in Figure 1. For each infiltration level and pattern, measurements were taken on two different surfaces, with generally good agreement between duplicate surfaces. As expected, longer infiltration times will generally lead to thicker structures by deposition of amorphous carbon on the existing nanotube structures. In the samples that were infiltrated for 15 minutes, there was an average increase in nanotube diameter of more than 400% for each of the patterns from the samples that had no infiltration (Figure 1). The pattern of nanotube growth also influences the diameters of the nanotubes. The forest pattern consistently exhibited the smallest diameters of the patterns tested for all infiltration times. The rib pattern on average resulted in CNTs with smaller diameters than the sparse post structure. This trend may be explained by the fact that the less dense structures allow the amorphous carbon to more freely flow around the nanostructures, increasing the amount of carbon that is deposited.

It is significant that these CICNT structures were rendered “superhydrophobic” without the addition of a thin film layer. These surfaces generally exhibited contact angles higher than or comparable to standard silicon etched superhydrophobic surfaces with PTFE coating. It is observed in Figure 2 that the post-patterned surfaces had a lower contact angle than the ribbed and forested surfaces. This may be due to the difference in the amount of surface area that the CNTs cover with the posts covering the least and the forests covering the most.

Carbon nanotube surfaces can be enhanced by infiltrating the samples with amorphous carbon. Infiltration not only increases the mechanical stability of the structure, but also can be used to control the features of the nanostructure. These CICNT structures can be rendered superhydrophobic for a range of infiltration rates. A draft based on these findings is being prepared for submission to ACS Nano Letters.