Inspired by the mechanics of how sunflowers follow the sun, we designed a system to increase output from solar panels by only using simple mechanics and beeswax. Solar power is becoming increasingly popular even in developing countries. We wanted to create a way to increase the power output of solar panels in such areas that lack technical support for current panel rotating mechanisms. When temperatures increase, beeswax expands, and we harness the motion by filling a piston with the beeswax. We use this motion to cause solar panels to turn, following the sun throughout the day and increasing electrical output.

Our methodology for this project followed three stages: piston testing, slat prototype, and the final prototype of the slat and piston combination. The piston testing began with acquiring a beeswax piston from a greenhouse supply company. We created an apparatus that would allow us to heat the piston, measure its displacement, and record the relationship between the temperature and piston (see Figure 1). We ran many tests, varying the elapsed time and the temperature ranges.

For the slat prototype, we constructed an array of t-shaped slats. We made calculations to space them out to ensure that they would not cast shadows on each other as they rotated (see Figure 3). For the final stage, we tested the combination of the rotating slat design with the piston. We measured the change in voltage from the solar cells as the temperature of the piston increased (see Figure 4).

The results from testing the pistons showed that there is a clear correlation with the temperature to displacement (see Figure 2). This answered the question to whether the piston reacted to specific temperatures or relative changes in temperature. We also learned that when the piston is cooled down, the piston does not automatically retract; it must be reset. From the slat prototype, we realized that our slat design has about 50% less surface area that can produce electricity than a regular, static solar panel. When the entire system was put together (the piston and the slats), we were able to increase the voltage of the solar cells by 52 volts just by changing the temperature of the piston.

The pistons might be an efficient and simple tool to have solar panels follow the sun, but they would work best in climates where the temperature is fairly constant year-round. This would mean along the equator, which coincidently is also where developing countries tend to be, making this design even more ideal for those areas. The multiple slat design however, would not be very effective. As stated before, we lose about half of the power-producing surface area with this design (compared to a normal, static solar panel). Rotating panels increase efficiency by at most 30%, which would not be sufficient to compensate for the loss of cell area. Nevertheless, the combination of the solar cells and piston were successful at affecting the electrical output of the cells.

In conclusion, we found that while the slat design was not more efficient than standard panels, the beeswax pistons are effective at increasing electrical output of the cells by affecting the directness of their exposure to the sun. Future work will include developing a system with the piston and a single, larger panel in place of the smaller slats.

We were able to present our findings at the Utah Conference of Undergraduate Research, and we are currently finishing a patent application for using thermally-expanding pistons as a means to rotate solar panels. 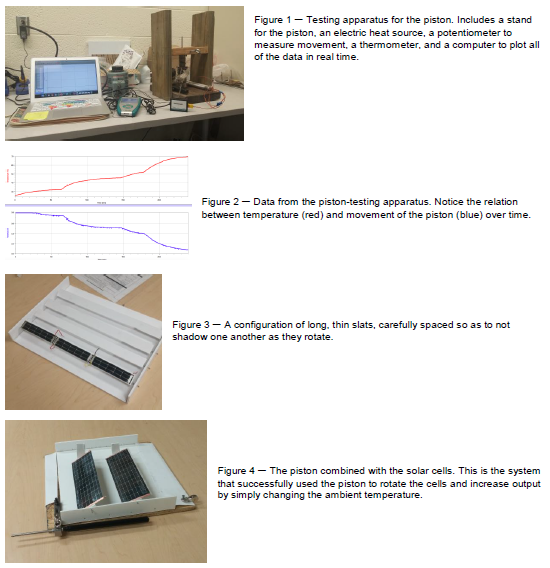