Mobile security illiteracy isn’t an issue for only the people of Uganda, it’s an issue all around the world, even in developed countries. Smartphones are becoming more technologically advanced, cheaper, and more people from all age ranges around the world are using them. Business information, social media accounts, email, images and all sorts of data are stored on these mobile devices. The data stored is often sensitive business or personal information, and while it is useful to have so much information at one’s fingertips, it also leaves the user open to mobile security threats. However, with increased use of mobile communications, Ugandans are more reluctant to speak freely about sensitive topics such as politics because of the government of Uganda’s ability to intercept their communication per the 2010 Act 18, Regulation of Interception of Communications Act. Also, Ugandans have experienced forced disruption and censorship from using social media platforms, including WhatsApp, Twitter, Facebook, and Instagram by the government in the last presidential elections early 2016.

With the issue of the government sometimes deciding to cut all social media communication, I decided that it would be useful to understand better how other Ugandans feel about their current state of mobile privacy and security. Afterwards, let them know about the social media platforms that can enable them to have sensitive conversations that I think need to be had. As a clarification, my research was not intended to pursue a political agenda but to instead better understand the situation of my countries mobile communications, and help be a means to inform people of privacy and security features available to them in some of the platforms they use to communicate.

Based on the pain point of informing people about means that will help them have a better way to talk about current issues, I decided to research ‘Improving Privacy and Security of Mobile Devices in Uganda,’ and build an educational website about mobile security as an end goal. Uganda being my home country was a significant reason for choosing to study this issue there. I have experienced for myself some of the problems of privacy and security of mobile communication in Uganda.

I conducted field surveys and semi-structured interviews that assessed Ugandan’s perspective on the government’s ability to control the use of social media, and how they felt about privacy and security of their mobile devices. I obtained this data from 30 Ugandans currently living in Uganda, and 10 Ugandans that are living abroad (i.e., United States) using a snowball sampling method to take advantage of social networks. I incorporated Ugandans not residing in Uganda because of most of them, including myself, mainly use social media to communicate with family and to do business in Uganda.

After gathering information that I needed to get a better understanding of what’s on the ground, I developed a website to educate Ugandans (information applies to people from other places) about the privacy and security of their mobile devices based on insights gained from the surveys and interviews.

As expected, an overwhelming number of respondents had the same concerns I had from the very beginning that caused me to decide to do this research. Social Media is a prominent part of people’s day to day lives all around the world which stands true for Uganda. So many people use at least one form of social media. In my survey, I asked questions connected to the use of social media which included; 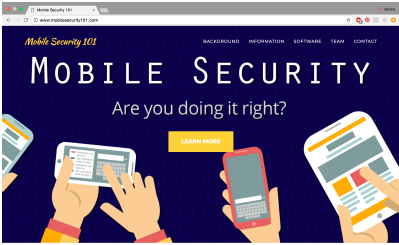 As observed above, a lot of Ugandans use the same typical applications as, for instance, people in the US. Because of these results, I focused on talking about the top two most used social media platforms which include: WhatsApp and Facebook Messenger on my website (www.mobilesecurity101.com) and the security features they offer. Many respondents expressed a need to learn more about mobile security and ways to stay secure. I catered to these needs through addressing the most common mobile security threats that people can easily have protection from, and countermeasures for these risks.

Overall, mobile device security is a relatively new technology because there is still not a significant focus on it. The demand for more and better functionality has consistently increased. However, more functionality leads to more complexity of the operating systems in various mobile devices. Increased complexity creates more channels for device vulnerabilities to exist. Malware is a significant part of security risks on devices of any sort. Malware includes viruses, worms, Trojan horses, and spyware. These malicious programs can perform a variety of functions, including stealing, encrypting or deleting sensitive data, altering or hijacking core computing functions and monitoring users’ device activity without their permission. Certain things like Bluetooth or Wi-Fi often time enabled by default on new mobile devices, are some of the gateways to malware placement on user’s mobile devices.

Awareness is the first step to healing. Many people don’t know what vulnerabilities exist with their mobile devices. Reducing illiteracy about mobile security has been my goal for this research. If anything, it’s the simple things that keep us users from being completely defenseless. Have hard to guess passwords on your devices, install new firmware when available because it often comes with better security features, don’t connect to unsecured wireless networks, turn Bluetooth off when not in use, and don’t open messages from unknown sources.