The development of statistical modeling plugins for use in AMOS and SPSS software continues! We cannot do justice to the contributions that we have been able to produce through our research this past year. The ORCA Grant was awarded at a very timely point in our statistical modeling research. I was in desperate need of some equipment upgrades to aid in the development process. We have produced the plugins that we had planned to create, and are now in the process of learning a new set of tools to create even greater levels of automation for statistical analysis. At the same time, we upgraded all our previous projects to the new version of IBM AMOS software version 25. 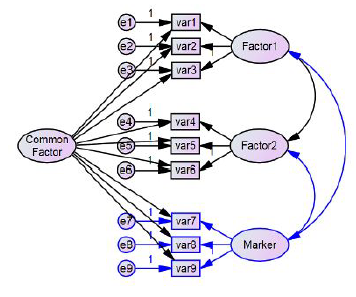 Our first task was to develop a plugin that could aid researchers in detecting bias within their constructs. Within a confirmatory factor analysis (CFA), researchers need to perform common method bias to show whether something external to a question may have influenced the response recorded in the dataset. For example, collecting data using a single (common) method, such as an online survey, may introduce systematic response bias that will either inflate or deflate responses. A test like this can take anywhere from a few minutes to several hours depending on how large your model is. The model on the right demonstrates the graphical portion of the work that must be done for a very simple model. Imagine how many arrows you would have for a model with 20 observed variables. After the graphical manipulation is done, you need to run, record, and compare the model up to three times while changing every arrow in the model every time to constrain the paths. The goal is to create a plugin that will shortcut this entire process to a few seconds where a user will only receive the necessary interpretations from the results of the model comparisons after the plugin has run.

The plugin was completed in a matter of months and the testing portion of the project began. We encountered several setbacks while developing the program, but were able to overcome the bugs through several iterations of the code.

This plugin, as well as the few others we have developed, have been used by an estimated 70,000 scholars. As an indication of the impact we are having, this is a comment from a user of the method bias plugin:

“James: Excellent tool. You must have the most dedicated resources in the world who develop all these fantastic add-ins. It is very generous of you for sharing these tools with the public.”

The plugin draws all the necessary paths from the selected observed variable, runs an analysis, records important measure values, then constrains specific paths and runs the analysis again, then compares the measures from the previous model with the current model, then does this all over again for a different set of constraints, and then returns the model to its original state. After this it creates an html file and opens it in a browser to show the user all the test results, interpretations, recommendations, and relevant references.

Our research doing these AMOS plugins has prepared us for the unique challenge of creating even more statistical modeling tools, possibly for other statistical software applications. Furthermore, this research has brought about the possibility of doing another tool in SPSS that would automate the Exploratory Factor Analysis. This is a process that can take weeks for a single person to perform, possibly with inconclusive results. Oftentimes this is a barrier to the completion of a PHD program or to finishing a manuscript. The research we have done and tools that we have built can help scholars all around the world speed up their work and produce more published results. I have become a much better programmer, learner, and researcher through the work that this ORCA grant made possible for me to do.