In this study we wanted to determine the effect that Interleukin-1 Beta (IL-1𝛃) would have in changing the effects that methamphetamines have on dopamine release in the nucleus accumbens (reward center of the brain). It has been well established previously that methamphetamines increases dopamine levels in the nucleus accumbens. Given that IL-1𝛃 increases inflammation in the brain which has been seen to be involved in dopamine release and that IL-1𝛃 is able to act on other parts of the brain, we suspected that by inhibiting IL-1𝛃 we would see a decrease in dopamine response to methamphetamines. If the IL-1𝛃 blocker, Kineret, were able to inhibit the meth-induced dopamine spike, it would be a potential candidate as a drug that could reverse addiction pharmacologically.

Our studies were performed in rats anesthetized using isoflurane and the recordings were done using fast-scan cyclic voltammetry (FSCV). We recorded from the nucleus accumbens using a carbon fiber tipped electrode placed at AP 1.6mm, ML 1.9mm, DV -6.5 mm and measured from bregma, a landmark on the skull. We stimulated phasic dopamine release using an electrode placed in the medial forebrain bundle, also measured from bregma (AP -2.5, ML 1.9, DV -8.0 mm). Methamphetamine was injected intraperitoneally with a concentration of 1.0 mg/kg followed by the injection of IL-1𝛃 antagonist Kineret at a concentration of 0.5ug/kg into the lateral ventricles. Data was gathered from a Kineret treatment group (n=4) as well as a vehicle group (n=4) and compared in the increase of dopamine from baseline. Originally we had planned to make a second measurement of dopamine levels outside the cells by using the microdialysis method, but our results with FSCV found this extra step unnecessary.

There was a surprising increase in dopamine release due to stimulation when Kineret was given with methamphetamine. We are not sure what this means in terms of our indications that Kineret should be reducing inflammation in the brain and thus hopefully dopamine. Possible explanations for these results are that the Kineret had an action on other neurons such as GABA neurons in the brain which increased dopamine in the nucleus accumbens, or that the action of IL-1𝛃 in nucleus accumbens takes place on a longer time scale than what we were able to see with this experiment. We also expect that our results could be affected by BDNF released by neurons in response to Kineret administration in the brain.

Further experimentation is needed to determine whether adding IL-1𝛃 would have the desired effect of reducing the methamphetamine-induced dopamine levels. We also hope in the future to study longer term effects to determine whether the Kineret will have the same effect in the long term, as well as studies in chronic administration of Kineret with methamphetamine in rats. 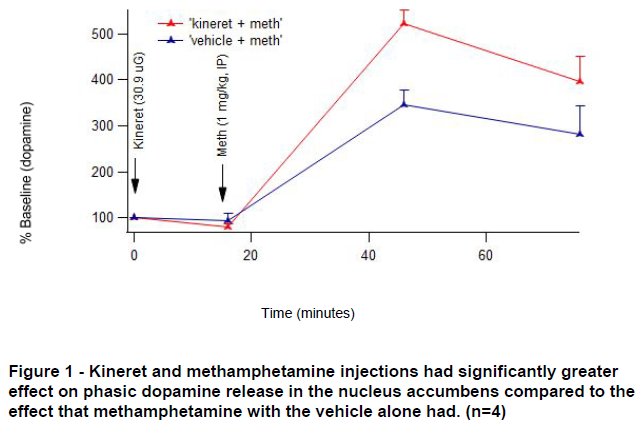