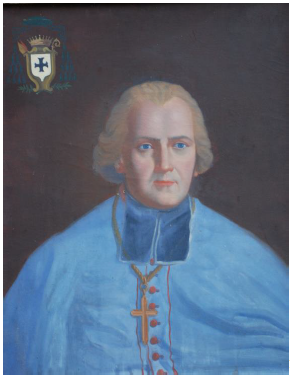 French and American historians have been writing about Bishop Jean Louis Lefebvre de Cheverus for almost a century. However, when I discovered this man, I noticed that an element of his life remained in the shadows—how he united the Catholic and Protestant communities. He was a Catholic Bishop in Boston where Anti-Catholic sentiment was at its height among the Protestants. When he built the first Catholic Cathedral in Boston, it was largely funded by prominent Protestants, among whom was President John Adams. His three decades in Boston came to an end when he was requested by King Louis XIV to be the first Bishop in Montauban, France after the revolution. Huguenots had been in control of several regions during the revolution, but with the return of the monarchy, came the reestablishment of Catholicism. This was a crucial time for the Huguenots and Catholics to find common ground, which is why the King imported Bishop Cheverus.

Many sources attest that Cheverus was a brilliant Catholic Bishop. However, what was he to the Protestants? The Huguenots? Why was he able to unite these two communities with the Catholic community in the early United States and France? Uncovering the answers to these questions was the goal of my research.

There are three record groups that I focused on. One was the Boston newspaper. The new diocese had been an item of interest to everyone, and thus, there were many articles that described the comings and goings of the Catholics within the community. It didn’t take long before articles emerged on the subject of Bishop Cheverus and his service. The second records are those found in the diocese of Montauban. Here, there are a collection of newspaper articles and letters about Cheverus and Huguenot individuals which shed light on Cheverus’ attitude towards those of a different faith. Third, in both Boston and Montauban, there are memoirs of the Bishop recorded about his death. These accounts highlight the admiration of the community and give clues to some of the reasons the Catholics and Protestants alike mourned his loss.

At the Boston Public Library, I found a collection of newspapers that I haven’t seen referenced in other works. The articles come from papers published in Washington D.C., New Hampshire, Kentucky, and Illinois and are almost all commentaries about Cheverus after he left Boston. Because of this, some of the papers are quoting French newspapers, others are memoirs of his time in Boston, and the rest are pieces of information about Cheverus’ travels or personal life. One of the most interesting articles describes Cheverus in a shipwreck on his way from Boston to France. One of the passengers mentions the pious Bishop who gave an impressive sermon on the Sunday after their shipwreck. These small insights were valuable for my research and could be worth publishing for other researchers to refer to.

After visiting Montauban and Boston, I gathered my findings and began work on my capstone history paper. This gave me time to reflect on Cheverus’ service in these two different, but parallel communities. What was he to the Protestants? The Huguenots? In Boston, Cheverus ministered to Protestants during the outbreak of the yellow fever. They couldn’t help but notice that he attended to them like he cared for his own congregation. In Montauban, there were two major floods during the two years that Cheverus served there. He opened the Cathedral to the victims of the flood, never asking what their religion was. This unbiased example of Christian discipleship overcame the war of words, and taught tolerance to the larger Christian community in two nations.

When reflecting on the ministry of Bishop Cheverus, it appears more jurisdictional than denominational because he purposefully ministered to everyone. Fierce social labels were placed on him and it would have been easy to return the favor. In fact, it was expected that he would not get along with the Protestants because there was an inherent discord between them. Nevertheless, it wasn’t denomination that Cheverus inquired after; it was the well-being of the person. When there was a catastrophe in his area Bishop Cheverus would have been what we now call a “first responder” and also one of the last to leave the scene. His service did not end when the threat was over, but rather, it gave him insight into who would need his help in the future. In this attitude, Cheverus became not only a minister, but a serviceman in his community. Throughout the Atlantic, Bishop Cheverus had been a father for and guide to whomever sought him. He ministered to those in need, be they Catholic or not, and thus, it was his actions that unified these once-opposing religious groups.