Much of the research done in the field of speech perception has focused on the behavioral aspect
of language and not on the functionality of the brain itself. For our research, we focused on the
neurological processes of speech perception through Quantitative Electroencephalogram
(QEEG) 1 and brain mapping. This allowed us to visualize the processes that the brain must go
through for successful speech perception. Specifically, we were interested as to how the brain
may differ in its processing of speech information in young (18 to 27 years of age) and senior (65
to 80 years of age) individuals. For our research, we utilized the mismatch negativity (MMN)
event-related potential, which is known to be present when differences between two sensory
stimuli are introduced. 2 It has been shown that the phonemes /ba/ and /ga/ represents prompts that
are influenced by speech perception and cognitive abilities, including language disorders. 3
Consequently, we used both the MMN and the /ba/ and /ga/ phonemes to investigate processing
differences in the two age groups.

Two participants were used in this study. A younger participant, 22 years of age, and a senior
participant, 71 years of age. Participants were fitted with a 64 channel Electrode cap. The
recorded phonemes /ba/ (516 ms) and /ga/ (520 ms) were presented via headphones in a passive
task. Following the administration of the test, data was analyzed for the Mismatch Negativity
(MMN) response. Brain maps of the MMN distribution and dipole source localization were also
completed.

Figure 1 and Figure 2 display the scalp distribution (brainmap) in the axial view of the MMN
obtained at the time of the maximum mean global field power (MGFP) in the young and senior
participant. In figure 1 (young participant) participant, we see activation in the left frontal lobe,
left parietal lobe, and the posterior mid-occipital lobe. In figure 2 (senior participant), there is
some, but apparent weak, activity in the left temporal and parietal lobes, with some activity seen
in the posterior mid-occipital lobe. Figure 3 and 4 show an overlay plot of all 64 channels as
well as a single plot of the mean MGFP. 4 The MGFP is the sum of squares of each channel for
each time point, thus representing the degree of activity at each time point. 5 Figure 3 shows the
earliest waveform representing the MGFP occurs at 81 ms with two additional peaks noted at
182 ms and 272 ms. Figure 4 shows the earliest waveform representing the MGFP at 145 ms
with three additional peaks noted at 232 ms, 316 ms, and 476 ms.

Overall the results would suggest that the younger participant had a reduced processing time in
which to identify the difference between the two phonemes. For example, in figures 3 and 4 the
first predominant MGFP is 64 ms earlier in the young participant. This trend remains consistent
across the remaining MGFPs. Figures 1 (young participant) shows strong processing in the left
frontal lobe, left parietal lobe, and the mid-occipital lobe which is what is expected in normal
speech and language processing. This is in steep contrast to the reduced processing in those areas
as seen in the senior participant (figure 2). This may be due to a lack of discriminability between
the two phonemes; hence, suggesting confusion and delayed processing of the speech
information.

This study has helped us to reason that, although not conclusive, it appears that in an older
population there is slower processing of the speech information as well as some cognitive
confusion, which leads to a reduction of available resources for interpretation. 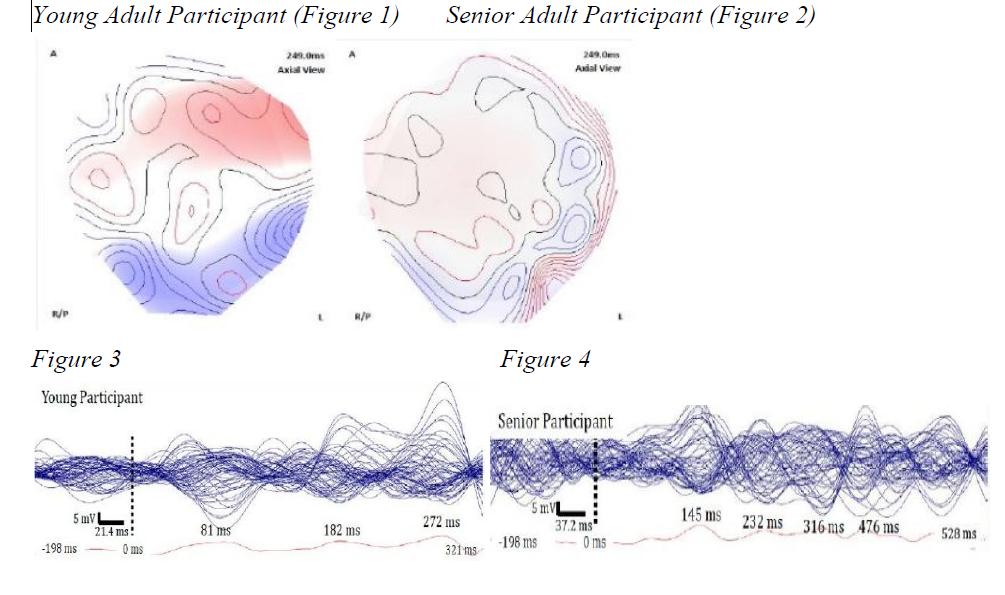