Pornography consumption has grown over the past decade with the industry’s leading providers reporting billions of more views with each passing year (Pornhub.com, 2015). The Internet has facilitated the social acceptance and spread of pornographic material, and it is believed that approximately 40 million Americans view pornography regularly. With such a large number of Americans viewing pornography, and providers reporting more video views, it is unsurprising to learn that the pornography industry generates more income than professional basketball, football, and baseball combined (Cooper, 1998; Ropelato, 2006).

The first phase to understanding the effects of pornography is to redefine the way pornography is being measured. Measurement of pornography in the current literature has been problematic for a few reasons. First, several studies only utilize a single-item Likert-style measure, and others only use a single-item measure with a binary response (e.g., “Have you viewed a pornographic film in the prior year? Yes, or no?”). Some may question whether a single-item measure accurately represents the complexities of this construct. Second, these measures appear to only measure a single factor of the overarching pornography consumption construct: frequency, or how often an individual views pornography. It is entirely plausible that an individual that consumes pornography frequently may have different psychological or health outcomes than an individual that consumes pornography for long amounts of time, or an individual that has only been accidentally exposed to pornography. Third, although multiple-item measures have been used in the literature for analysis, these measures often combine duration – or the amount of time an individual views pornography – and frequency, not allowing these two different constructs to be parsed apart and individually studied. Fourth, outcomes related to exposure and arousal to content, or viewing different types of pornography and the intensity of sexual arousal that follows, have been neglected in the current research. Exposure and arousal also may be crucial to understanding how individuals are affected by pornographic material.

To recruit our participants, we utilized Amazon’s TurkPrime.com – an Internet-based platform. Via TurkPrime.com, we recruited 321 individuals, and as per protocol, participants were asked to complete a 20-minute survey. In exchange for their participation, individuals were compensated $0.50.

Participants were asked a battery of questions that were believed to best represent our three theorized factors: exposure and arousal to content, the frequency of consumption, and the duration of consumption.

We used the statistical software r to run an exploratory factor analysis. Based on our plot, Eigenvalues greater than 1, and by the grouping of the factor loadings, we extracted the three factors that we originally theorized: exposure and arousal to content, the frequency of consumption, and the duration of consumption (see Figures 1 & 2). Additionally, we dropped any items with factor loadings below 0.52, and the internal consistency of the scale was good (Cronbach’s Alpha = 0.87).

The current paper sought to add to the literature by redefining the measurement of pornography consumption and examining its factor structure. We confirmed our hypothesis, three unique factors from our data emerged. 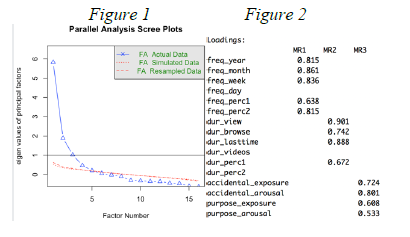