The goal of this project is twofold: first, we outlined the life and ministry of Elijah Able, an early Mormon Pioneer and the first well documented African American man to be ordained to the Priesthood. Second, we historically analyzed “the priesthood and temple restriction” (Race and the Priesthood, LDS Gospel Topics) on African Americans in the LDS church and how its understanding has grown over time.

The scholarly work sketching the life of Elijah Able has undergone a few distinct stages of development. The first stage begins with Andrew Jenson, the assistant Church Historian, who was the first to attempt a comprehensive examination of Able’s life. Limited to a single paragraph in his 1901 compilation of LDS biographies, Jenson outlines Able’s birth, priesthood ordination, western migration, residence, and missionary work (Jenson, Latter-Day Saint Biographical Encyclopedia, 1901). A different phase of the study of Elijah Able falls into the broader category encompassed by an attempt from members and nonmembers alike to situate the Church within the Civil Rights Movement. George Romney’s 1962 gubernatorial candidacy and subsequent presidential campaign forced the Church to step into the public’s eye at a particularly sensitive time. The study of the experience of Blacks in the Church and Elijah Able as a historical figure spiked in the years leading up to the lifting of the priesthood restriction. With this spike came an ensuing leveling off and eventual pause. Availability to more historical documents makes it possible for us to reexamine what is known.

Able’s life becomes especially noteworthy in 1836, after his ordination to the higher, or Melchizedek, priesthood. Although the specific date is contested, some claim that it was “Joseph the martyr” was the one who ordained Able to the priesthood (E. Kinney letter to W. Watson, 1885). Soon after this ordination, Able participated in the ordinance of washing and anointing performed in the Kirtland temple; these ordinances constituted the holiest and most sacred rituals available to members of the Church at the time (Nuttall, Diary of L. John Nuttall, 1879). This same year he received his patriarchal blessing and eventually served three missions- two of which occurred after his ordination into the office of Seventy. These important life events placed significant validity in the idea that neither Joseph Smith nor the early Church limited priesthood privileges on the basis of race or ancestry. 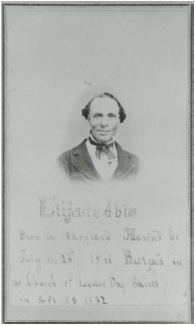 After Able’s 1853 western migration, as part of the Appleton M. Harmon Company, his position within the Church began to be affected by the priesthood restriction. In 1852 Brigham Young’s “An Act in Relation to Service” both legalized slavery in the Utah territory and established a policy which restricted the priesthood from those of African ancestry (Ricks, A peculiar place for the peculiar institution, 2007). The damage does not seem to emerge from the priesthood restriction itself, but rather from the logic used to support it. By virtue of his office as prophet, seer and revelator, Brigham Young placed renewed validity in the centuries-old idea that those of African ancestry were decedents of Cain and therefore inferior to other races. This was the first time this belief was used to justify policies within the LDS teaching.

The case of Elijah Able is an important one to consider within Church history. Its implications require faithful members to closely examine their understanding of Church government and policy. Few members will deny that the policy makes them somewhat uneasy or uncomfortable, especially in retrospect. Lest the study of the priesthood restriction is misunderstood, one must keep in mind that this is ultimately a peripheral problem as measured by the fundamental principles of the gospel. It appears that Elijah Able also considered it a secondary issue when assessing his devotion to the Church. From what we can gather, he remained faithful to the Church and its leaders. By March of 1857, three years after he last appeared on the record and now as a 47 year old man, he and his family were re-baptized as part of the Mormon Reformation (Michael Marquardt Papers, University of Utah). His decision to be re baptized asserts his loyalty to Brigham Young, the prophet under which this emphasis on spiritual rebirth was directed. Sometime after his arrival in Salt Lake Able also had his Seventy certificate renewed, proving not only that Able was loyal to the Church, but also that the Church leadership recognized him as a committed priesthood holder.

Few topics in the Church history create such controversy as that of the priesthood restriction policy. The sensitivity of the topic is due, at least in part, to the fact that “Church records offer no clear insight into the origins of this practice” (Race and the Priesthood, LDS Gospel topics). With this statement in mind, many wonder what merit there could be in the study of the priesthood restriction, race in the Church or Elijah Able in general. Academically, the “pursuit of the historical origins of the priesthood restricting is arguably the most consequential contribution that Mormon studies has made… [in] modern Mormon history” (Mueller, Introduction: Beyond Race and the Priesthood, 2015). Its implications reach far beyond simple historical facts. The process by which revelation is received, the burden of agency priesthood leaders must exercise, and the acknowledgement that as a collective group, the Church membership and their traditions can be wrong are only some of the implications and lessons learned from the history of the priesthood restriction.

Placing the priesthood restriction within a historical context proved to be much more difficult than originally expected. Although Brigham Young is placed at an especially pivotal point in the inauguration of the priesthood restriction, the social, political and cultural factors influencing his decision need to be furthered examined. In other words, the motives behind his decision to establish this priesthood policy cannot be boiled down to simple personal biases or preferences. The case of Elijah Able helps us situate and understand certain aspects of the Church and the development of the Church’s understanding of race and the priesthood. Ultimately, Elijah Able’s legacy remains because he established an example for Black Mormons, he withstood opposition unknown to most early members of the Church and he proved to be a loyal and faithful priesthood holder.