The academic objectives of this Mentoring Environment Grant (MEG) were to 1) train undergraduate students in the scientific process to prepare them in careers as physicians and scientists, and 2) to examine the relationship between in utero Nr4a1 beta cell specific deletion during maternal overnutrition and obesity on beta cell mass at birth and diabetic onset. We were successful in accomplishing these objectives, as evidenced by the training of four undergraduate students, presentation of research and local and national meetings, and initial preparation of a manuscript reporting our findings.

Articles in preparation resulting from this MEG

Technique mastery-Each student became proficient in a variety of techniques (RTPCR, Western blotting, Insulin secretion assays, etc.). I trained each student in the techniques, and in addition each student had a particular technique that they mastered and improved on by training other students in the MEG group and in the lab.

Scientific writing and manuscript preparation-These students worked very closely with me for the writing of local and national abstracts, ORCA applications, other submitted papers, and the paper that is directly linked to this research. These writing session consisted of initial drafts, edits and rewriting. The students improved significantly in their scientific writing through the MEG.

Below are lists of papers published and posters presented at scientific meetings, which have resulted from mentoring in my lab since this MEG grant was awarded in 2014. BYU student authors are in bold to emphasize the number of students who have benefited from mentoring in the Tessem Lab.

Using β-cell specific Nr4a1 KO mice we sought to determine the effect of in utero β-cell specific Nr4a1 deletion. Mice were generated by breeding Nr4a1Flox/Flox female mice with Nr4a1Flox/Flox INS1-Cre-ER/TM male mice. This produced Nr4a1Flox/Flox and Nr4a1Flox/Flox INS1-Cre- ER/TM pups, with the later being used as the experimental population. We also breed Nr4a1Wt/Wt female mice with Nr4a1Wt/Wt INS1-Cre-ER/TM male mice, in order to produce Nr4a1Wt/Wt INS1-Cre-ER/TM mice that were used as controls. Dames were fed a high fat-HF or low fat-LF chow for 1 month prior to being paired for mating. Upon verification of pregnancy by vaginal plug, dames were separated from male, kept on their respective HF or LF feeding regime, and received either corn oil or tamoxifen injections from e11.5 until birth. 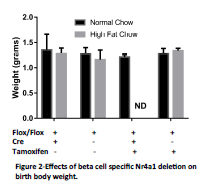 For this study mouse pups were harvested at birth to determine the effect of in utero Nr4a1 deletion in the context of maternal overnutrition. We measured this effect by measuring body weight, blood glucose and by harvesting pancreata for histological measurements of beta cell mass. We verified that Nr4a1 deletion resulted in decreased Nr4a1 expression in the pancreatic beta cell by causing Nr4a1 deletion in adult mice (Figure 1). We observed no significant difference in pup body weight at birth (Figure 2). Furthermore, no differences were observed in blood glucose levels, although there was a trend to increased blood glucose in the Tamoxifen treated animals (Figure 3). Of importance to this study, we were unable to obtain the Nr4a1Flox/Flox INS1-Cre-ER/TM mice from dames fed a high fat diet and treated with Tamoxifen. In each of these litters, the dame ate the pups soon after birth and we have been unable to obtain the necessary pups. This has occurred with 8 different litters using 7 different female mice as dames. Interesting, the only time that a litter was not eaten by the dame on high fat diet that was injected with Tamoxifen from an Nr4a1Flox/Flox x Nr4a1Flox/Flox INS1-Cre-ER/TM mating, all of the pups were Cre-, and thus had no recombination. In consultation with embryologists at the University of Colorado, this is indicative of serious and significant embryonic defects. For this reason we are preparing amendments to our study to no harvest the mice prior to parturition. 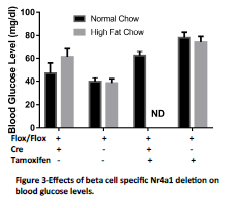 We were unable to complete this Aim for two reasons. First, the inability to obtain live Nr4a1Flox/Flox INS1-Cre-ER/TM pups from high fat fed, Tamoxifen injected mice left us without the ability to make comparisons to our critical genotype. Second, we attempted to allow the animals from the other breeding schemes to age. Animals born to mothers that received the Tamoxifen injections died within 1 week of birth. This suggests that we may need to revisit the method for treating with Tamoxifen. We will test both Tamoxifen in the drinking water, allowing us to use a lower and more constant dose to induce recombination, and we may delay Tamoxifen injections until the last week prior to birth. These studies are ongoing.

This work has demonstrated a very interesting set of data, and has presented us with more questions to pursue. Our findings that in utero beta cell specific Nr4a1 deletion results in serious survival issues demonstrates that Nr4a1 is essential and demonstrates the importance of continuing with these studies.

The budget for this project was spent as follows: