The objective of this research was to develop an aerodynamic wake model for a vertical axis wind turbine (VAWT), and to better understand vertical axis wind turbine performance. We were successful in developing a wake model. Additional work went in to understand trade-offs in power performance with acoustic constraints. The results were two conference papers, two journal papers, and open-source data and code. Additional work in ongoing to extended the wake mode’s usefulness for wake interactions and closely-spaced turbines.

All three students began as undergraduates, although Eric was a graduate student for most of this time period. Nick and Eric were Seniors and Dagan began later as a Sophomore.

Nick conducted exploratory proof-of-concept studies for this work. He and I met regularly to discuss ideas, and he was able to learn desired skills in optimization and computational fluid dynamics to prepare him for graduate school. He finished his BS degree and accepted a PhD position at the University of Michigan.

Eric transitioned near the beginning to become a graduate student in my lab and took on a leadership role. He and I met individually each week, and in turn he provided regular mentoring to Dagan. In addition to publishing multiple papers and presenting at a national conference, Eric had the opportunity to develop mentoring skills. He and I often discussed, in addition to the research, ideas for how he could more effectively mentor. Eric developed skills in computational fluid dynamics, scientific computing (Python and Fortran), optimization, cross validation, acoustics, scientific writing, and presenting. Eric was partially supported by this funding, but was also supported by other funds within the broader scope of his work.

Dagan and I met 1-on-1 as needed, as well as weekly during our lab-wide meeting, although his primary source of interaction and feedback was through Eric. Dagan had opportunities to present at a undergraduate conference, write proposals, and learn computational fluid dynamics software, all of which will help him in his goal of pursuing an advanced degree at a top graduate program. Dagan began as a sophomore, and with current ongoing work will likely be published before finishing his undergraduate degree.

Using vorticity data from computational fluid dynamic (CFD) simulations of VAWTs and modified Gaussian distribution fitting, we produced a wake model that can estimate a normalized wake velocity deficit of an isolated VAWT based on a normalized downstream and lateral position, tip-speed ratio, and solidity. When compared to CFD, which takes over a day to run one simulation, our wake model predicts the velocity deficit at any location with a normalized root mean squared error of 0.059 in about 0.02 seconds. The model was also found to agree with two experimental VAWT wake studies with a percent difference of the maximum wake deficit of 6.3% and 14.6%. 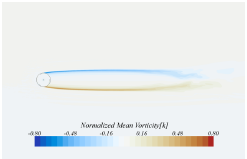