Excessive alcohol consumption in the United States is costing hundreds of billions of dollars in the United States alone. Addiction is a corrosive disease whose impact spreads across a broad spectrum including monetary damages, social disruption, health concerns, and life-ending decisions. Trailing a path of 88,000 alcohol-related deaths annually, government studies in 2006 reported that costs of excessive alcohol consumption reached $223.5 billion (Bouchery et al., 2011). In addition to monetary cost of alcohol abuse, the impact of this addiction can be devastating to personal and family life. Furthermore, addiction alters neural circuitry and becomes a self-absorbed behavior that robs humankind of our most sacred gift: Agency (“Neuroscience” 2009).

The mission of our lab is to better understand the physiological mechanisms of addiction with the goal of identifying better treatments for alcoholism. Dependence is best displayed when the animals show an increase in voluntary self-administration. The most common behavioral paradigm currently used in the field is the drink-in-the-dark (DID) procedure. The Steffensen lab has been using chronic intermittent ethanol (CIE) vapor chambers for our most recent chronic alcohol studies, but before this project we had yet collect reliable data showing an increase in drinking as a consequence of chronic exposure to alcohol. The Becker lab has published multiple papers using an alternating CIE vapor and alcohol drinking paradigm. They show that over the course of repeated CIE exposures, the alcohol dependent group shows an escalation in drinking (Becker and Lopez, 2004, Griffin et al., 2014). For this reason, we carried out the following experiment: replicate the Becker model of CIE exposure for alcohol dependence and modify that model to better suit the needs of our lab. With this in mind my final project was dual-focused: 1) Verify the Becker Model of chronic intermittent ethanol within our lab, 2) Confirm that the use of vapor chambers results in an alcohol dependent state in a mouse model. 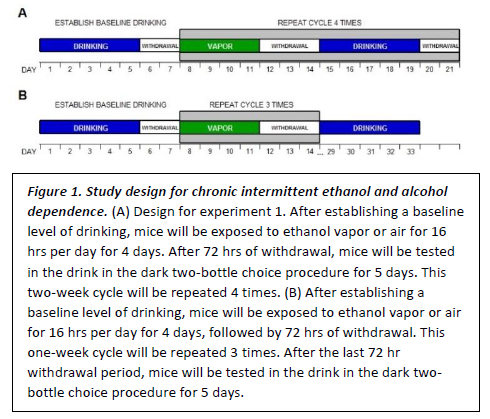 Experiment 1. I replicated the CIE model established by the Becker lab (Becker and Lopez, 2004, Griffin et al., 2014). C57BL/6J mice were alternated between receiving ethanol vapor or air and consuming alcohol in the DID two-bottle choice model outlined below. The first week, I established a baseline level of drinking with a 5 day test. The mice were then entered into the chambers for 4 days of 16 hrs on/8 hrs off of ethanol vapor or air. After a 72 hr period of withdrawal the mice underwent another 5 day drinking test. This cycle was repeated 4 times (Fig. 1), and each drinking test was compared to baseline drinking and the previous week. The Becker lab has established the 72 hrs of withdrawal as producing the peak effect of alcohol self-administration in the DID two-bottle choice test.

Drink in the dark two-bottle choice model. Three hours into the dark cycle mice were removed from their home cages and placed in individual cages with two bottles, one containing tap water and the other containing 20% (v/v) ethanol. After 2 hours of access, the mice were removed and alcohol consumption is recorded.

Experiment 2. I modified the Becker model (Becker and Lopez, 2004, Griffin et al., 2014) to establish a shorter paradigm more suited to the needs of our lab for electrophysiology recordings. The first week, I established a baseline level of drinking in a 5 day test. The mice were then submitted to the chambers for 4 days of 16 hrs on/8 hrs off of ethanol vapor or air, followed by a 72 hr period of withdrawal. This cycle was repeated 3 times (Fig. 1), followed by a 5 day drinking test and compared to the baseline drinking. We then repeated the cycle 2 times before extending the withdrawal across a whole week and repeating just the 5 day drinking so that we could show that dependence continues even after a prolonged withdrawal. 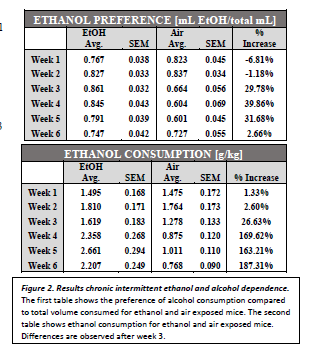 In Figure 2, we show the data from our experiment. Ethanol preference recordings, the percentage of ethanol in contrast to total intake of mice, displayed a rampant difference at week 3 between ethanol and air mice. This suggests that in a two bottle choice test after about 3 weeks of exposure the alcohol preference drastically escalated. However, just as important as defining preference is to determine quantity consumed. In the second portion of figure 2 the table shows that at week 3 the ethanol mice are drinking more than the air mice, displaying a more pronounced effect by week 4. This means that across a total volume consideration the ethanol mice display greater consumption than the air mice. In Figure 3 results are also shown graphically. Of considerable note is the week 9 portion where no vapor was received yet dependence still displayed throughout the continued cycles. 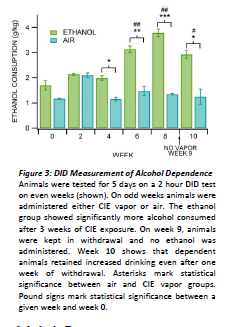 We tested Becker’s CIE paradigm with the modifications to suit the needs of our lab and found that three weeks of CIE exposure are necessary to establish dependence as evidenced by the DID two-bottle choice test. This will be a valuable foundation for future studies in our lab as we work towards better understanding and treating alcoholism.