Methamphetamine (METH) is a highly addictive drug of abuse and which results in serious financial, societal, and individual consequences in the United States. In 2005, METH abuse costs the country billions dollars each year. Societal and individual costs as a result of METH use are also high. Knowing how METH acts in the brain is a significant step in developing a pharmocotherapeutic treatment for METH addiction.

Per the proposal, to help solve this widespread issue, we set out to look at the mechanism of the sigma receptor (σR) in the addiction pathway, specifically looking at how it’s involved in inducing oxidative stress via reactive oxygen species (ROS), using 8-OHG as a marker for oxidative stress. We were going to use a σR antagonist group, BD 1063, versus a control group to determine the role of the σR in expressing 8-OHG during METH injection. We were then going to use a σR agonist to see if we could get more 8-OHG expression. As we got a clearer idea of the bigger picture, however, we realized that this course was becoming obsolete, so we turned our attention to looking at the interplay of the σR with one other protein in the METH pathway: the vesicular monoamine transporter (VMAT), which transports dopamine (DA) from the presynaptic cytosol into presynaptic vesicles. We specifically wanted to see if/where there were any oxidative events on the VMAT that could possibly be downstream of the σR. (Note: S-glutathionylation is another marker for oxidative stress that can be found on proteins themselves, which was important for an experiment we ran for this project).

We used immunohistochemistry. We used wild type C57BL6 mice. As a negative control, we injected saline into one group of mice. We compared this group with a METH injected group (0.1 mg/kg IV). We then used immunohistochemistry to analyze 8-OHG expression in the two groups. To do this, we sacrificed the mice, perfused the brains with paraformaldehyde, and removed the brain. After sectioning the brain, we quantified 8-OHG expression using fluorescence counts under confocal microscopy to make sure whether there indeed was greater 8-OHG expression in the METH than in the negative control group. A previous experiment had shown that during a control for oxidative stress, there as an observed oxidative event on the VMAT, an S-glutathionylation of Cys-488. We thus ran a second experiment, with the same protocol as the first, adding this time a group that had BD 1063 (the σR antagonist) pre-injected before the METH injection in order to prevent interaction between METH and the σR. Again using confocal microscopy, we then used fluorescent intensities for S-glutathionylated VMAT2 normalized against total VMAT2 intensity (n=3). This was done to show the σR’s involvement of oxidation of the VMAT.

We saw greater expression of 8-OHG in METH injected mice than in control saline injected mice (Fig. 1, A-C). This showed that METH does indeed induce greater oxidative stress than
found at normal physiologic conditions. In the second experiment, we saw increased levels of S-glutathionylated VMAT in METH injected mice than in control mice (Fig. 1D). We also saw decreased levels of S-glutathionylated VMAT in mice pre-injected with BD 1063, even though they had also been injected with METH (Fig. 1D). This σR antagonist is blocking the oxidative event on the VMAT.

While we weren’t able to test all of the things that we had proposed to do in my initial proposal, we were able to flesh out the bigger picture of what is going happening after injection of METH into the physiological system. We were able to show that METH does indeed lead to an increase in oxidative stress, presumably through formation of reactive oxygen species (ROS). We observed that blocking the σR in turn leads to decreased levels of oxidative stress that are caused by METH. With these findings, in addition to other findings involving this same system, one possible mechanism we propose for METH addiction is described in Figure 2 below. METH accesses dopaminergic terminals via the dopamine transporter (DAT) on the cell exterior, activates the σR on the endoplasmic reticulum membrane, which causes an efflux of calcium ions (Ca2+) into the cytoplasm and then into mitochondria. This Ca2+ signaling leads to increased metabolism and ROS formation. These ROS act on the VMAT to impede its function. Residual DA is then free to exit the terminal via DAT and accumulate in the synaptic cleft. Too much DA in the synaptic cleft is a hallmark of drug use. This implicates σR antagonists as potential therapeutics in drug addiction therapy. However, more research is needed to identify other possible functions of the σR. 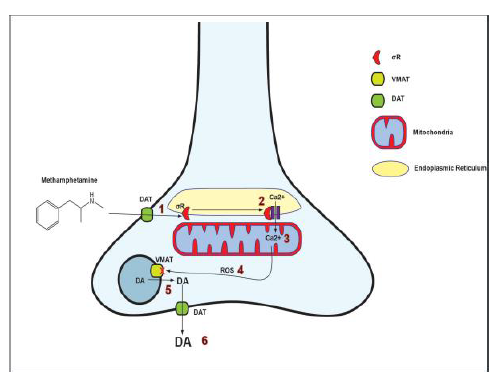