Diabetes’ prevalence is increasing at an alarming rate. Normally, insulin-secreting β-cells in the pancreas regulate proper glucose absorption and storage. Both Type 1 and Type 2 diabetes are characterized by decreased functional β-cell mass and insulin production and increased circulating glucose and fatty acid levels, which damage and destroy surviving β-cells over time. Though hyperlipidemia’s short-term effects are well studied, its long-term effects on β-cells remain unclear because it destroys them (1). We developed unique cell lines to mimic Type 2 diabetes’ progression by culturing INS-1 832/13 β-cells in progressively elevated concentrations of palmitate (a saturated fatty acid), which permitted culture and analysis at high concentrations. We have found that β-cell proliferation and expression of key β-cell function and survival genes, especially the transcription factors Nr4a1 and Nr4a3, are significantly downregulated when cells are treated with 0.15 mM, 0.3 mM, and 0.5 mM concentrations of sodium palmitate. We aimed to shed further light on the effects of Nr4a gene knockdown, as caused by gradually worsening hyperlipidemia, and the mechanisms behind those effects, ultimately promoting investigation into methods by which endogenous β-cells could be protected from the harmful hyperlipidemia that accompanies diabetes.

Cell culture, cell proliferation and viability assays, RT-PCR, and radioimmunoassays were all performed as previously described (2). 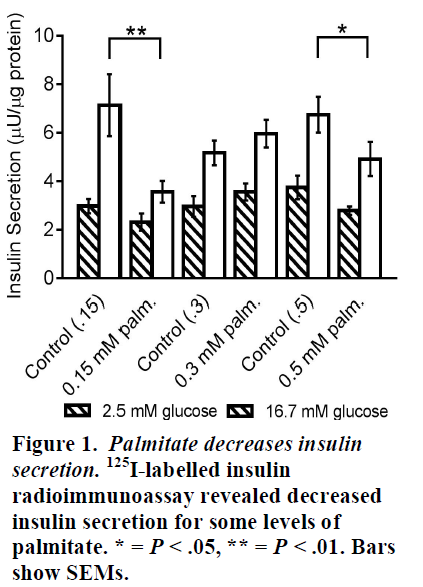 Palmitate decreases expression of some glycolytic genes. To determine possible mechanisms of action for the observed dysfunctions induced by long-term palmitate culture, we performed RT. PCR on all cell lines to determine relative expression of various relevant genes, measuring the amount of mRNA produced by each gene in the cells. The 0.5 mM palmitate line showed significantly decreased expression of the genes PGK1 and Aldoa, which are responsible for producing the glycolytic enzymes phosphofructokinase-1 and aldolase, respectively. Though statistically insignificant, trends showed down-regulation of almost every gene tested (Fig. 3). 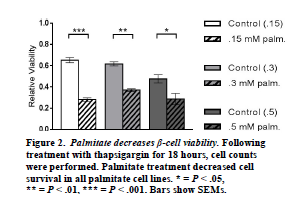 In reviewing these results, it should be noted that not all planned tests of glucose stimulated insulin secretion (GSIS) have yet been performed. Insufficient sample size may explain the puzzling fact that the 0.3 mM palmitate cell line did not show decreased insulin secretion compared to controls like the other two lines. Further, we plan to test additional genes related to the TCA cycle, since the genes shown here are an incomplete selection.

Considering the combined results of our experiments thus far, it is apparent that palmitate’s detrimental effect on β-cells simultaneously includes enhanced induction of apoptosis, reduction of cell proliferation, and reduction of insulin secretion. These problems correlate with decreased β-cell mass and function in vivo; the damage done to β-cells by elevated circulating fatty acids in diabetic patients likely involves these same avenues. In attempting to discern the mechanisms by which decreased Nr4a gene expression leads to these deleterious effects, we have discovered that expression of glycolytic and TCA cycle genes generally decreases along with decreased Nr4a expression, suggesting that the Nr4as normally stimulate these genes, but palmitate inhibits this action.