Habituation is the phenomenon that exhibits itself after repeated exposure to a stimulus;
the brain response to it is decreased. This is seen in many different mediums, like
tastes, touch, sound, etc., and thus could be observed in experiencing electronic
security warnings as well. The brain needs constant vigilance when seeing warnings
because large amount of personal information are saved on computers and other forms
of technology. Ignoring a warning after it has appeared once or twice could result in a
huge breach of information. Thus, it is important to study patterns of habituation of
security warnings. There have been other studies that studied habituation, but they did
not do so looking directly at neural changes to stimuli over time. The hypotheses being
studied in this experiment are that the brain response will decrease over each
experimental session to the same warnings (static warnings) as well as over the course
of five days. However, there will be a smaller decrease in response to warnings that
change between viewings (polymorphic warnings) in the sessions and between them.

Participants were first recruited from the BYU campus; stipulations being that they were
right-handed, had normal or corrected-to-normal eyesight, and were native English
speakers. 16 people were chosen (8 male, 8 female), however due to scanner
malfunctions one participant was omitted. They were placed in the MRI machine where
the experiment took place while fMRI scans were being done.

The experiment was done over five days. Each participant was scanned every day
across the five days and were presented with the warnings and other general software
images. Out of 120 software images, 20 were shown four times throughout each day
and the other 100 were split into groups of 20, which one group was displayed per day
so each image was only seen once. The other half was shown only once. This was
used as a baseline to show that habituation was happening outside of the subjects
becoming tired over time. The 40 warnings were split into 20 static and 20 polymorphic
warnings (which were changed by including symbols, colors, or an animation). These
were each repeated four times a day to create 80 trials. In sum, the subject was
presented with 260 images per scan. The neural responses were recorded and
analyzed through Analysis of Functional NeuroImages (AFNI) to interpret the data within
each session as well as between sessions.

The first data to be analyzed were the neural responses within each session.
Throughout all the variables, the brain regions that demonstrated the most habituation
were in the left and right ventral visual processing streams. However, the right and left
inferior frontal gyrus, the left posterior middle temporal gyrus, and the bilateral
dorsomedial prefrontal cortex also experienced significant habituation. Comparing the
different stimuli types within one session (polymorphic versus static warnings) the data
also shows eight regions of the brain where there are differences in habituation, right
and left superior temporal gyrus, anterior insula, and middle frontal gyrus, and right
medial frontal gyrus and inferior temporal gyrus.

Between days, these same effects are seen. However, they are in more localized brain
areas. The regions of interest (ROIs) for all warnings are the right and left insula. When
looking at the two types of warnings separately, two other brain regions show significant
habituation, left middle frontal gyrus and left middle occipital gyrus.

The brain regions that exhibit habituation show that this is occurring both within an
experimental session and over the course of five days between sessions. By testing
over the course of five days, it was demonstrated that habituation does not occur just in
one hour, but continues even after not seeing the stimulus over a 24-hour period.
Through this study, different polymorphic warnings were also designed to test the
difference between changing and unchanging stimuli. While there was some habituation for these warnings, they were less affected by it than static warnings were, both in one session and longitudinally. This is seen in Figure 1, where in the right ventral visual pathway the polymorphic warnings (red line) have continual increased blood flow (indicating more brain response and thus decreased habituation to the stimuli) than the static warnings (blue line). 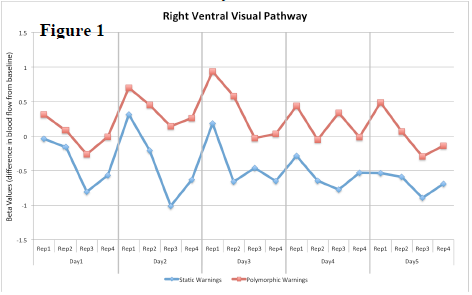 Different brain regions were discovered to have an increased likelihood for habituation.
While some brain regions are associated with visual information, such as left and right
visual processing streams, others are implicated in attention, like the frontoparietal
network in the insula and frontal lobes. This indicates that attention to the stimuli, which
is decreased when the features have not changed between presentations, is involved
with habituation to a warning.

Polymorphic warnings are better than static warnings at resisting habituation. Therefore,
security systems should look into using these to prevent user complacency. Through
this study, a good model of a polymorphic warning was designed that can be used in
future research and development. Furthermore, continued study into how to best
combat attentional habituation should be done to determine the best way to increase
neural responses to reappearing warnings.