Who Takes the Baby?: The Effect of Question Ordering on Preferred Family Leave Policies

The Family and Medical Leave Act of 1993 mandates that employees be given a minimum of 12 weeks unpaid leave for qualified family and medical needs, including the birth of new children. Unlike many other advanced countries however, the United States does not require employers to provide paid parental leave. Given changing parental roles that often result in both parents equally contributing to the care and rearing of the children, there has been an increase in fathers asking for paternity leave or extended leave around the birth of a child (O’Brien 2009). However, very little work has been done to study current preferences on paternity leave, and parental leave more broadly, in regards to time and type of leave.

Furthermore, survey research literature has consistently shown that the order in which respondents are asked questions can affect their answers such that an earlier question can prime their response to a later question. As such, a survey experiment was conducted in an effort to understand how question ordering can affect the length of paid and unpaid parental leave Americans prefer employers to be required by law to offer.

In August 2015, The Center for the Study of Elections and Democracy designed and fielded the American Family Landscape Survey to a representative sample of 3,000 Americans. This survey included a variety of questions designed to explore Americans’ attitudes towards marriage, families, and relationships as well as public policies that affect families. One specific area that was investigated was preferences regarding maternity and paternity leave and the current policies. To best understand the preferences of and relationship between maternity and paternity leave policies, a survey experiment was conducted among all respondents. Respondents were asked how many months of maternity and paternity leave employers should be required to offer. To conduct the experiment, respondents were randomly assigned to see maternity or paternity leave first. Additionally, respondents were asked about either paid or unpaid leave. Thus, the experiment produced a 2×2 design (see Figure 1). This design allowed the researchers to study how being asked about maternity or paternity leave affects a respondent’s opinion on both categories of leave. Additionally, this arrangement allowed for the preferences on paid and unpaid leave to be studied separately yet accurately. Of note is the fact that respondents were not given a back button between the two questions to prevent them from going back and changing their answer. 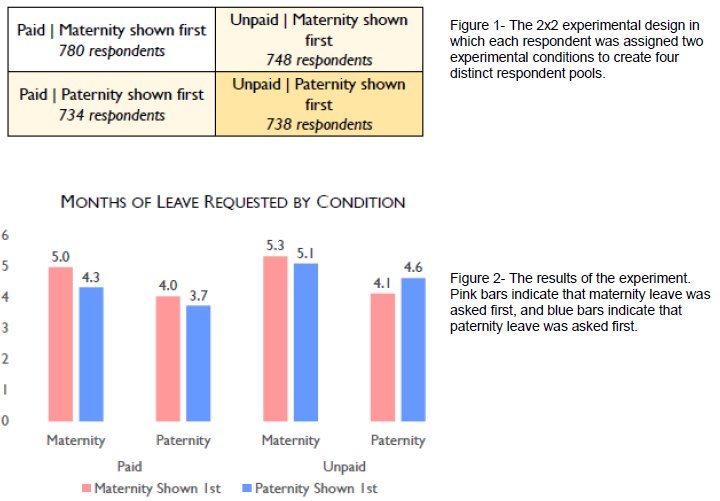