There have been many studies on political donors and their motivations. Particularly, the motivations of small donors in comparison to large donors have generated substantial interest. The Federal Election Commission requires donations to be disclosed only if they meet or exceed a $200 threshold. Those who meet that threshold are “large donors”, those who donate less than $200 are “small donors”. As a result, small donors have proved difficult to study because their information is not publicly available.

Generally, donor behavior has been ascribed to three types of motivational incentives that were first discussed by Clark and Wilson: material incentives, solidary incentives, and purposive incentives . This paper will focus on solidary and purposive incentives1. Purposive motivations come from ideology and the desire to see it implemented. Solidary motivations come from the enjoyment of being part of a group, they are the social benefits. In addition to the lack of publicly available data on small donors, social desirability bias poses another difficulty in studying donor motivations; people are reticent to admit that their donations were motivated by anything other than ideology. This is problematic because historically, studies have measured motivations using questions that directly asked about motivations which may have interfered with the accuracy of their findings.

I hypothesized that large donors would be more likely to participate in behaviors indicative of solidary motivations and that small donors would be more involved with behaviors linked to purposive motivations. I used donor data from the Obama (2008 and 2012), McCain (2008), and Romney (2012) campaigns. In order to mitigate the effects of social desirability bias, I measured motivations using other behaviors as proxies. The variables I used as proxies for purposive forms of motivation were whether the donor had volunteered for a political party or attempted to influence votes. For solidary motivations, I used whether they had attended a political event or attempted to convince another person to contribute money.

First, I compared the differences in the overall percentages of participation in each of the activities for both small and large donors. I found that large donors were statistically significantly more likely to be involved in all of the measured forms of behavior at the 95% confidence level. See Figure 1. I also analyzed the data using ordered probit models. For purposive motivations the results were inconclusive. For solidary motivations, the results were statistically significant for both the 2008 and 2012 data. As the amount of money an individual donates increases the probability that they will engage in neither of the forms of solidary participation decreases. Higher donation amounts are predictive of increased behavior associated with solidary motivations. See Figure 2.

These results suggest that while large donors are more likely to be involved in additional forms of participation overall, we cannot be sure whether they differ in purposive motivations compared to small donors. Small donors do not appear to have stronger ideological motivations than larger donors, this is consistent with Graf’s findings2. However, large donors do seem to exhibit more solidary motivations. As the overall donation amount increases, the number of solidary motivated activities predicted also increases.

These findings do have some important limitations that merit further study. The forms of participation used as proxies are not perfectly aligned with the forms of motivation; I was limited by what information was available in the dataset. Nevertheless, even with the proxies used there are statistically significant differences in the level and types of involvement between small and large donors. 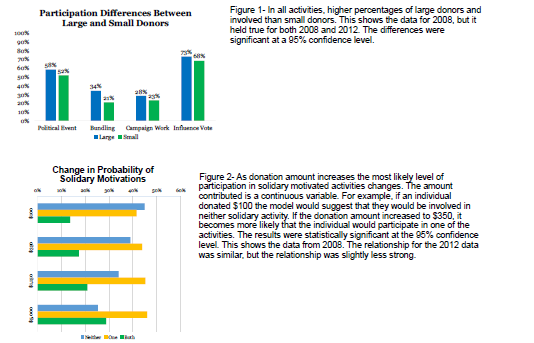