Most chemicals known to cause birth defects have been shown to induce oxidative stress – a disruption in intracellular redox signaling. The overall purpose of this research is to better understand how environmental/chemical insults that cause oxidative stress result in specific malformations. Since the tripeptide glutathione (GSH) is an abundant antioxidant and important mediator in redox state and signaling, the goal of this project was to measure levels of glutathione during early embryonic development in order to determine when embryos are more susceptible to environmental and chemical stresses. Changes in the amount of GSH will affect the sensitivity of cells to reactive oxygen species (ROS) and resulting oxidative stress and damage. Determining which periods of development exhibit low levels of GSH will help us identify times in development when defects are more likely to occur from environmental and chemical insults. We hypothesize that GSH levels will be lower during organogenesis (days 3 and 3.5 in chick embryo) as cell differentiation is driven by a more oxidizing redox state.

The chick embryo was chosen as the developmental model because of ease of manipulation. Fertilized eggs were incubated for days – 2.5, 3, 3.5, 4, 4.5, or 5 – and then windowed. 20 μL of 200 μM hydrogen peroxide was added, and then the eggs were incubated for additional time – 15, 30, 60, 120, or 180 minutes – before embryo collection. Time point 0 was a control, and no hydrogen peroxide was added. After collecting the embryos, samples were prepared for HPLC analysis to measure glutathione in its oxidized (GSSG) and reduced (GSH) form. Protein assays were conducted for standardization purposes. Using the Nernst equation, overall redox potential was determined from GSH and GSSH concentration.

In preliminary findings (Figure 1), we used quantitative-PCR to determine mRNA levels of genes necessary for GSH synthesis. Expression was measured via chick embryo collection of various developmental stages during early organogenesis (the period of highest early differentiation). We noted that expression of glutathione synthesis genes was comparatively low during organogenesis and that this could significantly affect cellular redox state as dictated through the GSH redox couple.
Since quantitative-PCR measures mRNA levels and does not reflect actual GSH levels, we decided to use HPLC. HPLC separates out individual proteins based on their affinity for a 2-aminopropyl column which allowed us to measure actual levels of the glutathione tripeptide in its oxidized (GSSG) and reduced (GSH) form. As we suspected, levels of GSH were significantly lower during organogenesis – days 3 and 3.5 – before increasing by nearly 5 mM (Figure 2). Levels of GSSG followed a similar pattern, but the changes were not as dramatic. Overall, levels of total glutathione showed a marked decrease during days 3 and 3.5. 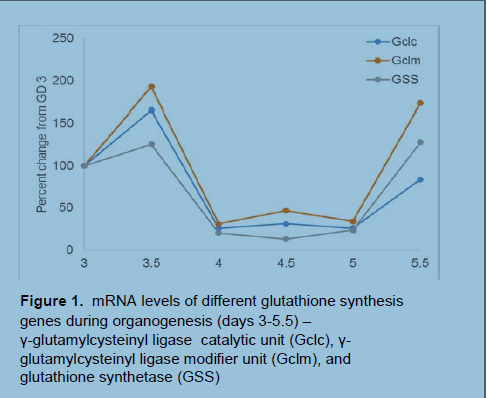 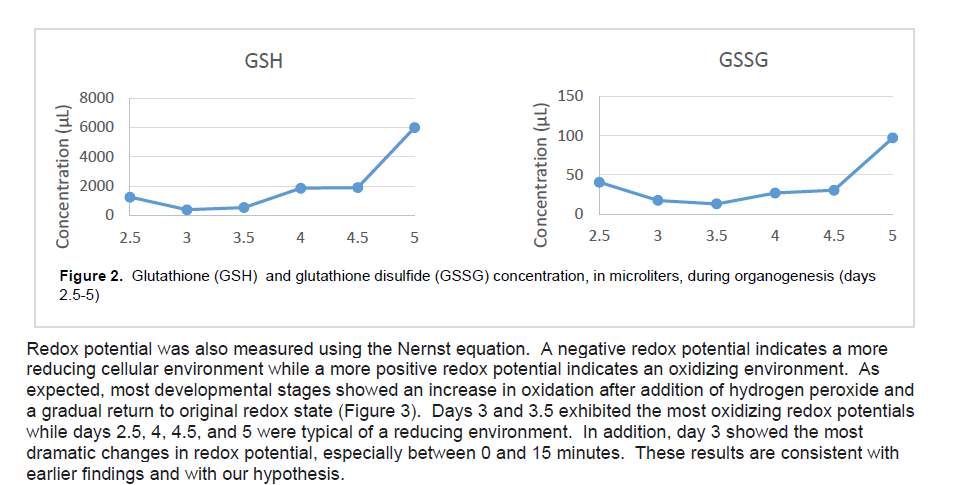 Our findings match our hypothesis well. Levels of GSH decrease significantly during day 3 and 3.5 before showing a large increase during days 4 through 5. Since cell differentiation is driven by a more oxidizing redox state, it is reasonable to believe that during organogenesis tissues will experience a redox potential that is more oxidized. Glutathione is a powerful antioxidant, and, as a result, redox signaling and cell differentiation is suppressed by large quantities of glutathione. In order to allow for differentiation, cells must down-regulate glutathione and other antioxidan 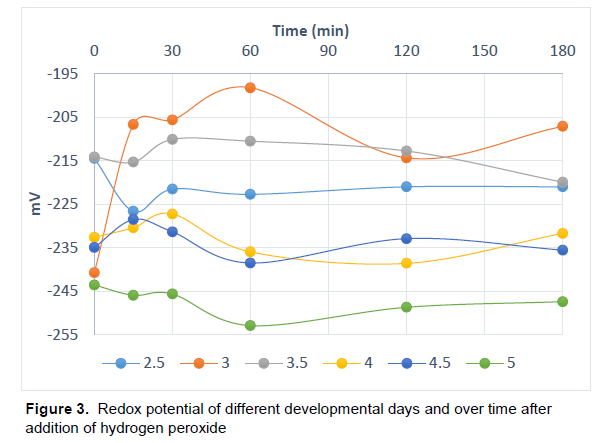 ts. In addition, low levels of glutathione will also render cells more sensitive to changes in redox potential, and periods of low glutathione will be more susceptible to damage because of oxidative stress. This is also evident in our findings, as we see in Figure 3 that the redox potential of day 3 embryos fluctuates dramatically after introduction of the oxidant hydrogen peroxide.

Glutathione is also synthesized by mammals, and the future direction of this research is to perform the same experiments in a mammalian model such as mouse embryos or even human cells. Finally, we intend to see if potentially harmful changes in redox potential can be prevented by treatment with a Nrf2 inducer prior to environmental or chemical insults.
We have successfully discovered which periods of development exhibit varying levels of GSH. We have also identified periods of development when these defects are more likely to occur, and that this is largely in part due to changes in the amount of intracellular GSH. This project and future research in the Hansen lab will help us understand the cause of birth defects and discover how they can be prevented.