Due to recent increases in incidence, diabetes is now classified as a global epidemic. Diabetes results from the eventual destruction of β-cell mass, which causes decreased insulin secretion. Increasing functional β-cell mass may provide a cure for diabetes. A previous study has shown that oligomeric procyanidins were effective in preventing weight gain, fat mass, impaired glucose tolerance, and insulin resistance in a mouse obesity model1. This was the first long-term feeding study to examine the activities of cocoa constituents on diet-induced obesity and insulin resistance. 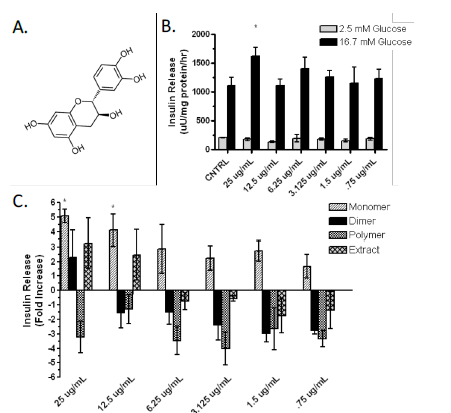 Our research suggests that these outcomes are results of β-cell proliferation, enhanced glucose stimulated insulin secretion (GSIS) and decreased apoptosis. My research has demonstrated that cocoa epicatechin monomers (CEM) enhance GSIS in β-cells (Fig 1B, 1C). This indicates that CEM may positively modulate pathways in mature β-cell function. We hypothesize that CEM enhance one of five crucial steps involved in GSIS: glucose uptake by GLUT2, mitochondrial respiration, cAMP up-regulation, potassium channel blockage, and calcium influx into the β-cell.

Permeabilized Cell Respiration: Malate (2mM) and glutamate (10mM) where used to determine basal, nonphosphorylating respiratory state (LEAK) of the mitochondria. The respiratory capacity of mitochondria in the ADP-stimulated state of oxidative phosphorylation (OXPHOS) was assessed by the addition of ADP (2.5mM) and Succinate (10 mM). Integrity of the mitochondria was tested by adding cytochrome c (10 μM). FCCP (.5 μM) was added stepwise to measure the uncoupled respiratory capacity of the electron transfer system (ETS). Residual oxygen consumption was determined following inhibition of complex I and III with the addition of Rotenone and Antimycin A (2.5 μM). Residual oxygen consumption served as a baseline correction2.

Statistical methods. For analysis between two groups, Student’s t-test was used, and differences were considered significant when p

The human body relies on insulin produced by β-cells to metabolize carbohydrates and fats. Insulin stimulates glucose absorption by skeletal muscles and adipose tissue. Functional β-cell mass is ultimately lost in type 1 and type 2 diabetes. Without functional β-cells, the body is unable to maintain normoglycemia, resulting in a variety of maladies. Functional β-cell mass is defined by the number of β-cells (dependent on proliferation and apoptosis rates) multiplied by the insulin secretion rate. Increasing β-cell proliferation or insulin secretion while decreasing apoptosis could be used to produce β-cells for islet transplantation, a potential cure for diabetes. Many attempts have been made to regenerate β-cell mass, however many have failed to produce mature, functioning β-cells. These attempts include overexpression of miR-29a and HNF4-α, both resulting in proliferation while decreasing glucose stimulated insulin secretion3,4. Without functional β-cells, these methods are not usable therapies for diabetic patients.

The insulin secretion process is well defined5. Our preliminary data demonstrates that CEM induce insulin secretion. Therefore, the goal of our project was to determine the mechanism by which insulin secretion is upregulated. Of the five molecular checkpoints involved in GSIS, I was able to completely measure the second indicated step, mitochondrial respiration. Based on our data (Fig 2), cocoa epicatechin monomers increased the LEAK, or the basal amount of respiration in which protons leak through the gradient back into the mitochondrial matrix without the use of ATP synthase. This data suggests that CEM may increase the expression of certain components of mitochondrial function, including a possible increase in expression of transport proteins that bring malate and glutamate into the mitochondria. This study outlines CEM as possibly enhancing GSIS of the β-cell as early as affecting the mitochondria. Increased mitochondrial respiration further confirms CEM
enhancement of GSIS.