The growing worldwide incidence of obesity and its associated pathologies, like type 2 diabetes, has received much deserved attention. However, despite this attention and substantial research efforts, little meaningful progress has been made in slowing or reversing the growing cost and trends of obesity worldwide.

As of 2008, almost 10% of medical costs in the United States were incurred due to obesity or other obesity-related diseases1, with a substantial amount of this cost stemming from the dramatically increased risk of diabetes with excess fat mass2. According to the US Centers for Disease Control and Prevention, more than one third of adults in the United States are obese with the number increasing each year. As the cost of obesity related health care continues to grow, it is necessary to continue to search for novel, direct treatment options. While lifestyle and diet changes should continue to be studied, direct treatment options will be important to reverse the epidemic problem of obesity which has already occurred and to reverse any future spread.

The purpose of this project was to elucidate the efficacy of a novel molecule, SGI-1252, in the treatment and reversal of diet-induced obesity and diabetes in mice. Based on preliminary research, we hypothesized that SGI-1252 injected mice would be protected from weight gain and diabetes induced by a high fat, high sugar “western diet.”

Injections were administered to each mouse 3 times a week (Monday, Wednesday, Friday) for 4 weeks and weight was measured for each mouse weekly. Throughout the treatment period, the mice could eat the respective diets at will (food was never limited).

At the end of the treatment period, blood glucose levels were measured for each mouse and final weights were recorded for each mouse. Inguinal fat tissue was collected from the mice, and mitochondrial respiration was measured in the fat samples using a high resolution respirometer (Oroboros Instruments). In other words, the oxygen consumption rate of the fat tissue samples was measured when the tissue was supplied with Glutamate and Malate (GM), Adenosine Diphosphate (D), and Succinate (S).

After 4 weeks of treatment, “western diet” mice in the low dose group gained much less weight than the control group, and the high does group hardly gained any fat. For the standard diet group, the low dose mice gained a similar small amount of weight when compared to the control group, but the high does group actually lost weight (Figure 1). Additionally, treated mice in both the low dose and high dose groups were protected from diabetes when compared to the control mice (Figure 2). Further, mitochondrial respiration in fat tissue of SGI-1252 treated mice increased (Figure 3).

Our results support our hypothesis that mice treated with SGI-1252 would be protected from diet induced weight gain and diabetes. More research will need to be done, however, to discover the mechanisms by which SGI-1252 achieves these effects. We are currently evaluating data to investigate the role of TGFβ inhibition in this mechanism. Additional research will also need to be done to evaluate the safety of SGI-1252. If it is found to be safe and the mechanism can be understood, SGI-1252 may be an effective treatment for diet induced obesity and diabetes. 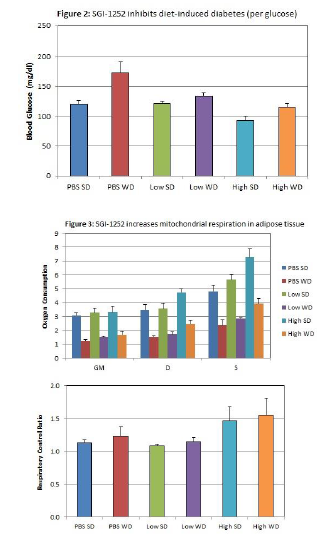 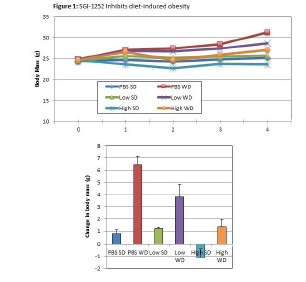