As early as the beginning of the 20th century, Metchnikoff proposed that putrefactive bacteria living in the digestive tracts of hosts contribute to various disease processes and that modification of microbiota composition through consumption of viable microbes might help to improve health and longevity. This theory of longevity was the basis for the relatively recent trend of probiotic foods, the idea being that “healthy” bacteria could be ingested to produce a positive phenotypic result. The probiotic approach to treatment has been limited to large processes such as digestion or correcting large deficiencies in humans, but as evidence continues to mount that microbes found in the gut of living animals influence host biology, gut microbes have been more intensively examined for their influence on specific host problems1,2,3. The living conditions of the model organism D. melanogaster, more commonly known as the fruit fly, can be manipulated such that flies develop and live in a completely sterile environment. Because a host organism develops its own unique gut micro population from its surroundings, fruit flies raised in these conditions will be devoid of any gut bacteria. Their environments can also be manipulated such that only one specific microflora population is introduced, allowing the establishment of a definitive results from certain gut microbes. Such experiments have helped show that certain bacteria have been proven to be directly involved in inflammation, development of colonic neoplasia, and immune responses to disease and cancer1. Specifically, in human patients, gut microbiota was found to play a role in the metastasis of tumors2. Because of the unique ability for fruit flies to be raised in completely sterile conditions or conditions with one specific bacteria, an experiment was designed to define what exact molecular action is responsible for improving a host’s response to cancer metastasis. Because of short lifespans, the cancer incidence rate with wild flies is almost zero. Pagliarini and Xu found that expression of the oncogenic RasV12 gene and inactivation of the scrib gene responsible for maintaining cell polarity would result in uncontrolled cancer growth3. Additionally, the RasV12 gene must be labeled with green fluorescent protein (GFP) so that metastatic events can be visualized. By establishing fruit fly lines carrying both mutations, we would have suitable organism to elucidate how gut microbes influence a host’s response to cancer. Our first responsibility is ensuring that two stock lines can be crossed to consistently produce offspring with both needed genetic mutations.

Three separate stocks of flies obtained from the Yale School of Medicine were cultivated in separate environments to maintain their genetic mutations. Strain Tatsushi 1 contained the GFP labeled RasV12 protein. Strains Tatsushi 3 and 19 contain separate mutations that inactivate the scrib gene. Eggs were collected of each strain, and these eggs were deposited in a separate environment to establish virgin lines that could be crossed to create the fatal RasV12/scrib-/- cross. Six hours after pupation, each stock was sorted into males and females. These separate stocks were maintained for five days to guarantee that each line was correctly sorted and that all flies were virgins, measured by the lack of larvae after 10 days of observation. The virgin stocks were combined with the necessary corresponding
virgin stocks (see table 1). Eggs were removed and allowed to develop to third-instar
larvae, at which point they were observed under microscope using a laser to excite the GFP
attached to the RasV12 protein. Because the RasV12 protein should be confined to the eye
disk, any green fluorescing areas outside of the eye disk are evidence of metastatic tumors
spread throughout the larval body4.

We were able to reproduce the results previously published by Pagliarini and Xu. Thirdinstar
larvae consistently presented distant sites of colonization of foreign fluorescing cells.
These results contrast sharply with third-instar larvae that only express oncogenic cells in
the eye disc and larvae that express no fluorescence at all (see figure 1).

With a consistent stock of flies that display the metastatic phenotype, we can begin
isolating larvae in sterile environments and introducing various microbes to test
microbiome contribution to cancer metastasis. If flies with a certain strain of gut microbes
display resistance to cancer metastasis, a metagenomics analysis can pinpoint what
specific genes in the microbe contribute to the difference in cancer metastasis.

By combining two separate strains of D. melanogaster separate genetic mutations affecting
uncontrolled cell growth and cell polarity, we established a F1 generation strain that
displays metastatic behavior. This F1 strain will be used as an assay to ascertain the effects
of various gut microbiota on enhancing and/or suppressing cancer metastasis in the host
organism. Additional refining will be necessary to ensure that results are consistent; but
with these results, the overall experiment may continue. 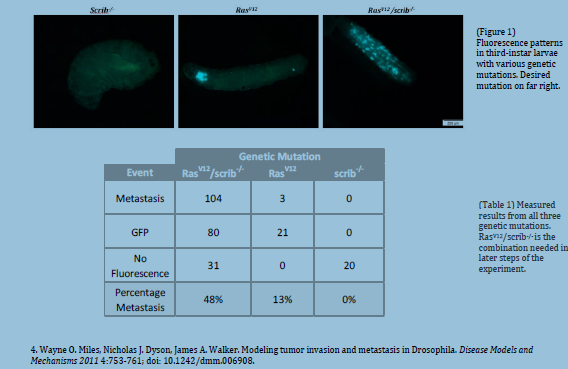