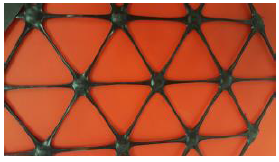 Geogrid is a polypropylene material manufactured with approximately 1-in. wide openings, called apertures. A triaxial geogrid configuration is illustrated in Figure 1. Geogrid reinforcement is typically positioned beneath and/or within an aggregate base layer in a pavement structure and is designed to prevent lateral spreading of the individual aggregate particles comprising that layer. Thus, inter-particle friction can be increased among the individual aggregate particles located above and potentially below the geogrid. When this occurs, the result is an increase in the stiffness of the aggregate base layer that leads to a greater load-carrying capacity of the pavement.

The spatial extent of increased stiffness in the immediate vicinity of geogrid reinforcement can be quantified in terms of a zone of influence. The zone of influence may or may not extend through the entire base course layer. Knowing the zone of influence around the geogrid would allow for more accurate pavement designs, which would ultimately lead to more effective use of the limited funds available to build roads. Thus, the purpose of this project was to determine the zone of influence in a geogrid-reinforced roadway in northeastern Utah. 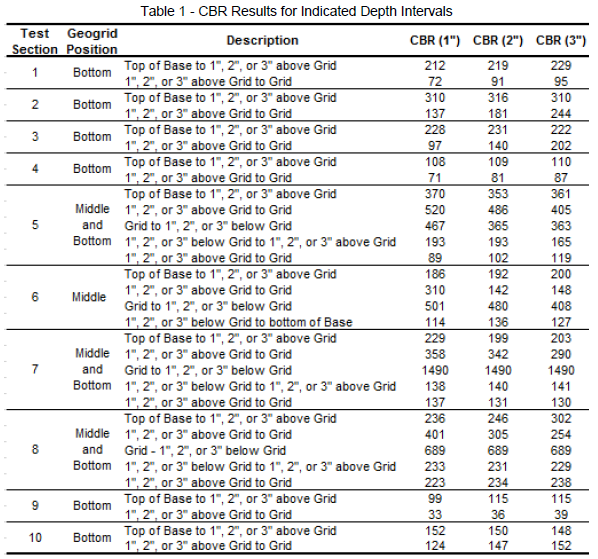 The purpose of this project was to investigate the zone of influence of triaxial geogrid installed in a pavement structure in northeastern Utah. When the geogrid is placed in the middle of the base layer, the data indicate that CBR values can be approximately 1.5 times higher in the 2-in. zone of influence above the geogrid and 4.5 times higher in the 3-in. zone of influence below the geogrid than at distances farther away from the geogrid. All results developed in this research are limited in their application to the material types, pavement designs, construction techniques, environmental conditions, and trafficking levels associated with this study.