According to the U.S. Department of Transportation, nearly 10% of the nation’s 611,845 brides are structurally deficient. (https://www.fhwa.dot.gov/bridge/nbi/no10/defbr15.cfm) This means that nearly 60,000 active bridges are unsafe. This is a major problem, and one that is not easily solved. Many of these bridges are of significant importance to the nation’s highways and cannot be retired without inconveniencing millions of people. Furthermore, to repair or rebuild all of these bridges would take billions of dollars, a cost that far exceeds Federal Highway Administrations (FHWA) funding.

BYU has been working for many years on a technology that has great potential in significantly reducing the cost of rehabilitating bridges, as well as provide valuable information about bridges that allow for better maintenance, thus decreasing future costs of repairing bridges. This technology is a vertical impedance measuring device. It works by applying a voltage to a probe placed on the surface of the bridge. The current that flows from the probe to the rebar is measured, and the impedance of the concrete directly beneath the probe is calculated. The impedance of this concrete is highly correlated to the integrity of the bridge at that specific point. What makes this technology so attractive though, is that it can be continuously taking measurements while mounted to a moving platform, thus allowing for highly detailed maps of weak points in the bridge at a speed many times greater than traditional testing techniques. This testing allows bridge managers to know the scope of the work needed on bridge rehabilitation projects, thus significantly decreasing the cost of the overall work, and allowing for better maintenance planning.

The purpose of this research project was to improve the efficiency of the vertical impedance probes. In order for these probes to get accurate measurements the concrete must be pre-wetted to allow good coupling of the probe-bridge interface. This research was used to determine how much soaking time is needed to get accurate measurements, thus allowing a reduction of time spent on bridge decks, while still obtaining accurate data.

There were two parts to this experiment. The first part was performed in the lab, the second in the field. For the lab portion three concrete slabs of various material compositions were acquired. These slabs would simulate concrete of different types and age in the field. Water was applied to the surface of each slab and a probe was placed immediately on the slab. An impedance measurement was taken every 400 milliseconds and then plotted. The results of these tests and practical limitations were then used to decide the minimum soaking time needed in the field to get good result.These probes were then taken to the field and tested multiple bridges. Each bridge was scanned two to three times depending on time limitations. The final scan of each bridge was then compared to the first scan to see if the longer soaking time for the final scan effected the results.

The lab tests of this experiment resulted in many plots similar to that shown in Figure 1. The only major difference between the graphs of different slabs is that they had different y offsets due to the various concrete mixtures used. In each case however the impedance fell to a relatively low value within a second. This resulted in the decision that no minimum time of soaking was required before scanning a bridge deck. The field experiments yielded good results. For a bare asphalt deck the first pass and the second pass resulted in almost identical maps. Unfortunately, if a bridge deck had an overlay it was observed that the first pass did not reveal the same amount of detail as later passes. 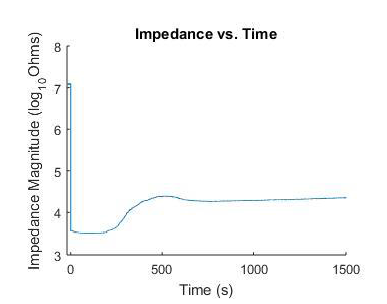 Figure 1 – Impedance Vs. Time graph of the first 25 recorded minutes of a concrete slab

Figure 1 had many features that we were not anticipating. Originally we thought that water would disperse slowly through the concrete thus resulting in a lowering impedance for the first few seconds, however we did not see this, instead it appeared that the water allowed the probe to immediately couple to the concrete surface and give us an accurate impedance measurement. We also were not expecting the steep rise in the impedance at around 240 seconds. We believe this was the result of the surface water being absorbed in the concrete decreasing the effective area of our probing area thus increasing the impedance. Finally, we were expecting the soaking time needed for bridge decks with overlays to be slightly different than that of a bare deck, but we weren’t expecting as significant difference as we observed.

In conclusion we decided that for bare decks no minimum soaking time is needed. This significantly increased the technologies scanning speed. Furthermore, this experiment showed that there is still more research to do on how bridge overlays effect impedance measurements.