Origami-based engineering creates products that solve problems inherent in other designs. For example, they can compress into smaller volumes, achieve new and unique motions, and lessen or mitigate numbers of welds, fasteners, or other joining methods. However, a weakness of these designs is the necessity of folding them and seams that result from that folding. If viable, 3D printing these designs would eliminate the need for complicated folding machinery or adhesives to close the seams. Since origami is, by its nature, dynamic, this research aims to help designers predict fatigue lives (number of cycles until failure) of thin, printed PLA walls for origami designs.

PLA test specimens were printed on a Makerbot Replicator 2 printer, using Makerbot filament. They were then creased in the center with a hard roller. Afterwards, they were placed in a fatigue tester (as shown in Figure 1), which cycled up to 6 specimens at once through an angle of approximately 180°, intended to subject them to the most extreme conditions. The cycles to failure were counted and plotted, where failure was defined as a visible hole appearing in the specimen. A curve was fitted to the data to find a relation where the best fit was considered the one with greatest R-squared value, while avoiding overfitting. 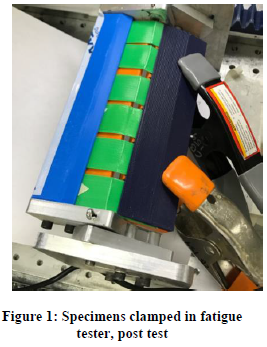 As shown in Figure 1, data were collected from a number of test specimens. These data were plotted and a several regressions were tested on them. In the end, a power regression was found to best fit the data with an R-squared value of 0.7801. It is likely that there is no overfitting with this type of fit because it does not increase the order of the curve to fit the data, as could happen with a polynomial regression. 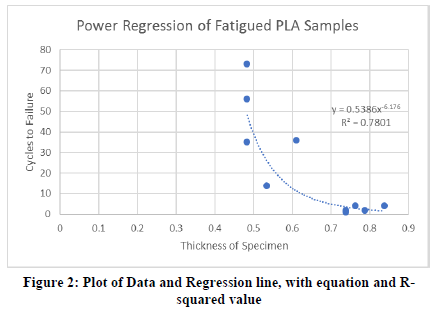 In order to reach a point where strong conclusions and confidence intervals can be created, it is necessary to gather more data. That will be the purpose of further research, as outlined in the conclusion section of this report. However, the ability to find a correlation with a high R-squared value is encouraging. It allows designers to predict the failure of their design and then validate that prediction. Instead of printing many copies of the product and testing them all to gain an idea of their performance, he or she can decide on a desired fatigue life, print a few copies at the thickness corresponding to that value, and validate that prediction through testing. Being able to predict the fatigue life thus reduces the amount of guessing and number of iterations required by the designer. As this research collects both more data on PLA specimens and other materials, it will give designers a variety of potential combinations of materials and thicknesses to meet the product requirements.

This research is not complete and will be continued in the upcoming semester. It ideally will consist of additional testing to increase predictive abilities of the data as well as fitting the results into current fatigue life failure theories. The additional testing that is required to validate and expand these results falls into 2 categories: additional testing of different thickness specimens made of PLA and repeating the testing with other 3D printed materials. It would also be beneficial to test ABS specimens, as well as those produced by stereolithography printers to get a variety of materials. Finally, based on the results of these tests, a full-scale demonstration should be attempted by printing an origami design from multiple filaments at several thicknesses to demonstrate the validity of these results.

If there are thicknesses of 3D printed materials that can be easily printed with an acceptable fatigue life, the use of origami-based engineering designs can be significantly accelerated. These designs will not be hampered by limitations on folding automation or seams. Instead, designing, prototyping, and ultimately producing them will be faster and cheaper, enabling designers to solve the engineering problems to which these designs are uniquely adapted.