The purpose of this project was to derive Flow Duration Curves (FDCs) by three separate methods in order to compare the accuracy of these methods. The FDCs would be used to estimate the amount of water that would be consistently available for hydropower.

For this research, FDCs were created for four test sites located in the Dominican Republic and chosen by the Instituto Nacional de Recursos Hidraulicos (INDRHI). These four sites were in the Manabao, Salto Jimenoa, Los Dajaos, and Bejucal watersheds. A visit was made to each site in February 2016. Of these four sites, only Manabao had recorded historical data. The historical data for Manabao was obtained on the BYU World Water website and provided by INDRHI.

For this research, there were three possible methods for developing an FDC for each of the sites. The first and most reliable method was to create an FDC by using recorded historical data. The historical data, comprising of the date and the flow, is gathered in a spreadsheet and ordered from the highest flow to the lowest flow. The flows are then numbered and divided by the total number of flow rates plus one, so that the highest flow has the smallest probability, and the lowest flow is close to 100 percent. The flow rate is then plotted against the exceedance probability to produce the FDC.

The second method used to derive an FDC employed a set of ArcGIS tools developed by Blake Buehler, a previous graduate student under the direction of Dr. Nelson. Buehler’s tools comprised of eight steps that included delineating a watershed, calculating its slope and the average precipitation over the area, and assigning an appropriate curve number. When all of the tools execute properly, flow rates are calculated for predetermined probabilities (e.g., 95 percent). These points can then be plotted for an approximate FDC.

Partial results from all three methods are recorded in Table 1 for each of the sites. The developed FDCs for Manabao are shown in Figure 1. 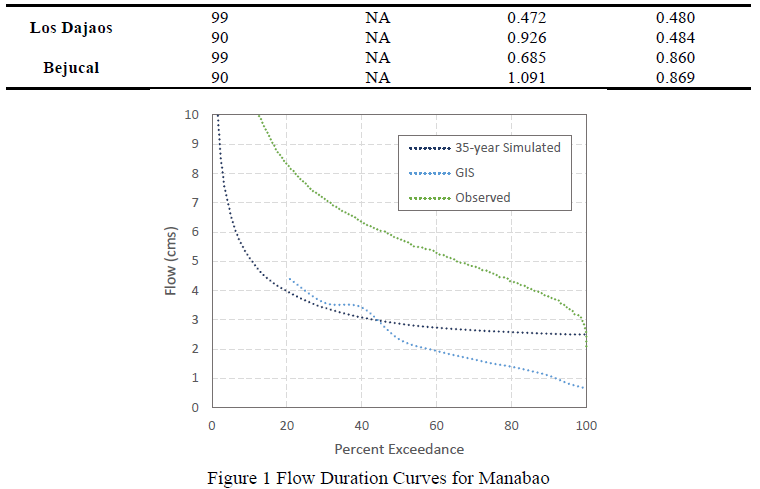 The best method for developing an FDC is to use recorded historical data. That is uncontested in this research. Our analysis of the four sites showed that both the ArcGIS Tools and the data simulated by the Tethys Streamflow Predictor application underestimated the flows of the FDC. The Tethys data values were closer to the historical data recorded in Manabao, but the slope of the ArcGIS curve was closer to the historical data FDC. It was observed that the flows estimated using ArcGIS could be adjusted using a constant base flow so the curve could more closely align with the historical FDC for the lower half of the plot. Matching only the lower half of the plot is considered sufficient, as the ArcGIS tools have a known limitation and are only expected to be accurate for the higher exceedance percentages. It is the flows that are available for at least 75% of the time that are needed when planning hydroelectric energy generation.

Neither the Tethys Streamflow Predictor application or the ArcGIS tools produced a satisfactory FDC without some alterations. These necessary alternations provide the stepping-off point for more tests. These results were presented to the representatives at INDRHI in April 2016.

Future research is planned to test if the ArcGIS tools could be modified to estimate an FDC without using a curve number. Separate versions of the tools may also be developed to reflect separate regions in place of using the curve number. These methods should also be repeated for more sites where historical data is available, as having only one site with a control FDC is not sufficient for statistical analysis.

Further steps have already been taken to find the sites in the Dominican Republic where historical data is available. These sites will be used to further test the accuracy of modified surrogate methods for developing FDCs.