In 2014 I was awarded a Mentoring Environment Grant by ORCA to examine microfossils embedded in the dental calculus (tartar) of individuals who were found during excavations in and around the site of Paquimé, which dates to the thirteenth century A.D. This ancient city is located in the Chihuahuan desert in modern-day Casas Grandes, Chihuahua, Mexico. Over the last two years, I have been able to involve students in the extraction, processing, publishing, and presentation of the results of this analysis. While the research is ongoing, preliminary results have positively identified several fascinating foods that were consumed by the ancient people of Paquimé. This research has already piqued the interest of many archaeologists working in the U.S. Southwest/northern Mexico and has significantly contributed to the training of at least two students.

Daniel King, one of our graduate students in the Department of Anthropology, has taken on a significant role in this project. Early on he was given the tasks of preparing the samples, processing them, and communicating with the laboratory that conducted part of the analysis. Daniel has also had the opportunity to report the preliminary results at a conference in January 2016. We have also been invited to publish the results in a peer-reviewed academic journal.

I had initially intended to involve several other students in the project, but this was hampered by the fact that BYU’s International Vice President deemed travel for students to northern Mexico too dangerous. Daniel and several other students who were going to extract the tartar from the teeth of the human remains in Mexico were not allowed to travel there in 2014. Fortunately I was able to employ the help of a PhD candidate at the University of Missouri, Kyle Waller, who was also conducting research on the human remains in the summer of 2014. I was able to send him collection supplies as well as fund his travel for this portion of the research. Kyle successfully extracted samples from 110 individuals and sent those to BYU in the Fall 2014 semester. 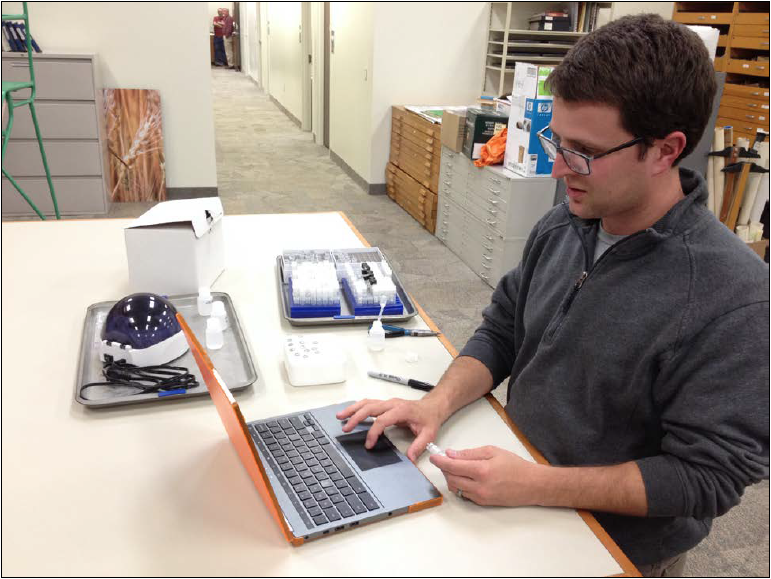 Daniel was also tasked with identifying a lab and researcher to analyze the prepared calculus samples. He found Chad Yost of Paleoscapes to conduct the research and was able to receive a full report of the completed analysis in the Fall 2015. I especially commend Daniel for collaborating with Chad Yost who was able to offer us an educational discount for his services, significantly reducing the costs for analysis and allowing us to analyze 100% of our samples.

As a result of this additional collaboration with Kyle and Chad, Daniel was able to learn academic etiquette regarding data sharing and co-authorship. In addition, he was able to be part of a multinational research project that will impact his career well into the future. At the moment, Daniel is projected to complete his thesis, which is on the results of this study, and is planning to graduate in April 2016.

As mentioned above, only Daniel King and Kyle Waller were participants in this study. We were able to share the preliminary results of this study at the 15th Biennial Southwest Symposium in Tucson, Arizona, in early January 2016. The research was not only well-received, but Daniel was approached by an editor for a peer-reviewed journal who would like to publish our research. We have made plans to draft a manuscript after Daniel completes his thesis in February 2016. These final results will be presented at the 81st Annual Meeting of the Society for American Archaeology in April 2016. I will be taking Daniel to Orlando to present our paper, which will be co-authored by Kyle Waller and Chad Yost (who analyzed the microfossils). This will be a good foundation for writing a longer, more comprehensive research article that will be submitted later this year to the Journal of Archaeological Science or American Antiquity, two top-tier journals in the field of archaeology.

Results of the Project

Of the 110 samples analyzed, 63 (57%) yielded some type of microremain. Numerous starch granules and fungal spores were recovered from the dental calculus samples. Some phytoliths and pollen grains were recovered, but they were few in number. In addition, microremains of water organisms: diatoms, chrysophytes, and sponge spicules, were also recovered, but rare.

Phytoliths are microscopic silica structures found in certain parts of plants, including stems, leaves, and roots (Pearsall 2010:356). Phytoliths were present in 32 (29%) of the samples (Figure 1), and morphological characteristics suggest the presence of cool and warm season grasses, sagebrush, and squash. Interestingly, no maize phytoliths were identified and the lack of these could suggest the use of nixtamalization, a process in which corn is soaked and cooked in an alkaline solution (i.e. limewater), destroyed any of these microfossil silicates (Yost 2015). Maize subjected to the nixtamalization process has several benefits over unprocessed grain: it is more easily ground; its nutritional value is increased; flavor and aroma are improved; and mycotoxins are reduced.

Starch granules were present in 47 (43%) of the samples (Figure 2). Starch was by far the most common microfossil identified, and maize starches represented the majority of this category (n=23). Grass grains (e.g., little barley) and one tuber starch were also identified. Lenticular granules showed signs of grinding and dry roasting (parching), while Zea mays granules showed signs of grinding, dry roasting, and fermentation (Figure 3). Large numbers of grinding tools have been found at Paquime and at surrounding sites (Searcy and Pitezel 2014; Whalen and Minnis 2015:54), and it is likely that many of the starch grains with evidence of damage from grinding, especially maize, were ground on manos and metates.

Microremains of water organisms: diatoms, chrysophytes, and sponge spicules, were also recovered, but rare. Aulacoseira sp. diatoms identified in some of the samples are found in freshwater bodies of water, including ponds and lakes, and can be incorporated into food during processing or directly from drinking water. Their presence may suggest a riverine or lacustrine aspect to ancient diets, or may simply be evidence of water consumption from nearby rivers and springs. Additionaly, a large mass of diatoms, starch, and other org matter was identified. These diatoms could be of marine (ocean) or brackish water type.

Corn smut fungal spores (Ustilago maydis) were present in six (6%) of the samples, and other types of fungal spores were present in 13 (12%) of the samples. Corn smut was known to be eaten by people in the Americas, past and present, and the large galls that form on maize kernels are quite nutritious (Yost 2015). Huitlacoche is the Aztec term for this food and has a flavor similar to mushrooms.

Pollen grains were present in 10 (9%) of the samples, including those from pine trees, which grow in the mountain forests of the Sierra Madre to the west. Ingestion of these grains was likely inadvertent due to the ubiquitous nature of pine pollen in this environ. Thin yellow flakes of unknown origin were also present in 44 (40%) of the samples, but Yost (2015) could not determine the organic matter from which they derived. Woody plant vascular tissue fragments in four samples also suggest possible medicinal uses of bark or the incorporation of wood fibers into food or nixtamal.

Based on our results, maize seems to have been the most common plant food represented in our samples from Casas Grandes. Cool season C3 grasses were also found and many lenticular starch grains showed signs of grinding, dry roasting, and cooking. Corn smut (Ustilago maydis) was found as well, which is unsurprising as this fungal pathogen has been determined to have originated and evolved along with maize domestication. There is strong evidence, ethnographic and archaeological, for the intentional consumption of corn smut (Valverde, et al. 1995), although unintentional calculus contamination is still a possibility.

Given the high amounts of maize and grass starch granules found, the near complete absence of phytoliths is interesting. As mentioned, the absence may suggest the use of nixtamalization to process the grains, which would eliminate the phytoliths from the microfossil record.

Perhaps the most interesting results were evidence for maize fermentation. Corn beer, or chichi, has been recorded elsewhere in South and Central America. Three samples all showed damage resultant of the fermentation process. The granules exhibited striae from grinding, were swollen, or were gelatinous. Moreover, the three samples exhibit damage from three distinct heating temperatures, perhaps representing the entire chicha-making process. Whalen and Minnis (2015:51) have found some evidence of possible fermentation at a site west of modern-day Mata Ortiz. They found a number of pottery fragments from large vessels with “interior pitting that might have been the result of erosion due to the fermentation of a beer or from the alkaline treatment of large amounts of corn.”

Yost (2015) suggests that “the presence of two marine diatoms in two diatom-starch aggregates indicates that fish and/or other marine aquatic resources were utilized.” While the presence of diatoms is not surprising, it may suggest other food sources not commonly accounted for in the literature or the archaeological record. Even more exciting are the complementary data being generated by other scholars concerning Casas Grandes health and diet. Katzenberg et al. 2015 have conducted preliminary analyses of skeletal morphometrics, isotopic characterizations, DNA, and paleopathologies of several of the same individuals studied in this research. We expect that these data will enhance our findings and provide unique dietary, genetic, health, and nutritional information regarding those who inhabited this desert region of Chihuahua.