For digraphs weighted and unweighted, one important application is ranking: Given a directed graph, whether it be the Internet or a social network, which node (representing a web page or a person) is the most important? There are many different methods to find answer this question. A few are highest indegree, closeness centrality1, betweeness centrality2, eigenvector centrality, Katz Centrality3, and PageRank4. Our idea is to use sparsity, or the idea that in a network only has a few important nodes, to determine the ranking on a graph.

In my and my professor’s measure we preform L1 minimization in a neighborhood of the Perron eigenvector. This finds a vector that is sparse (few non-zero entries) and close to the Perron eigenvector. Then we take the entries in the ‘sparse’ vector as importance where the highest entries in the ‘sparse’ vector correspond to the most important nodes in the graph. We do this on the matrix itself and the graph as viewed as a random walk (Pretend you are walking on the graph and the node you go to next is determined by picking an outgoing edge at random) as two separate rankings. 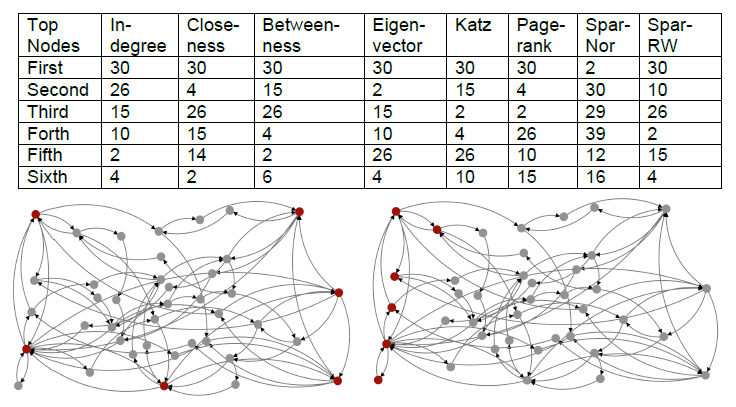 Figures 1 and 2 – The red nodes are the six most important given by eigenvalue centrality (Right) and by ‘sparse’ vectors on the 0-1 matrix (Left).

Further research needs to find what are the characteristics of the nodes that the algorithm picks up on, how to better pick the neighborhood around the Perron eigenvector, and then extend this to larger, different types, and real-world graphs.

In conclusion, my professor and I have looked at another way of finding importance in network structures using the idea that only a few of the nodes are important. This method has good results on small test cases.