Chase Adams and Kirk Belnap, Department of Asian and Near Eastern Languages

In tandem with Al-Wer’s ongoing Amman Project which discusses the dialect contact and potential for dialect formation in Amman, Jordan, this study seeks to understand the variance of conjugation patterns of the glottal-initial verbs ‘akal ‘to eat’ and ‘axad ‘to take’ based on the ethnic background and generational identity of the individual speaker. This study seeks to isolate a pattern of linguistic focusing and identity formation in third-generation Ammani youth vis-à-vis the phonetic shape (±Yod; /a:/, /o:/) in glottal-initial verbs which could corroborate Al-Wehr’s assertion that there is a new emerging vernacular as opposed to stable variation.

Linguistic identity is a crucial concept to understand in the broader context of social and political makeup of any particular region. The sounds employed by individuals in their words, the organization of those words into meaningful sentences, and the use of sentences in extended discourse are all key factors in noting how these individuals identify themselves into particular groups.

The bulk of the data collecting portion of this study has involved the recording of natural speech of Ammani natives. Utilizing the linguistic interview technique, no standard script or method has been used on individual speakers in order to record the most natural of speech. 30 participants were interviewed – 17 of Jordanian heritage and 13 of Palestinian heritage. Three main strategies have been used to elicit the appropriate conjugations of these glottal-initial verbs:

1) Asking the subject about normal, everyday occurrences in his/her life; asking about a moment of fear.

2) Asking two or more participants to discuss subjects which would encourage their usage of the words.

3) Asking participants to conjugate a full paradigm of these verbs in the present imperfect.

Thus, the study has been able to listen for usage both in natural and elicited settings which allows for better understanding of social and generational values among the third generation Ammani natives. For a more in-depth analysis of the generational differences see al-Wer, 2014. She discusses the origins of the difference in pronunciation of the two aforementioned verbs. It is clear that Palestinian and Jordanian speakers originally began by utilizing different phonemes, /a/ and /o/ respectively. However, now with the confluence of multiple refugee and immigrant groups due to the political turmoil of the region over the last 50 years, the dialect mix in Amman reflects an unsettled search for a singular linguistic pattern.

A spreadsheet has be created to run the regression of the data gathered. These data have been put into place in Excel, and their details selected and placed into a pivot table and chart system. This system allows for any number of variables to be rated against each other. The study seeks to interpret the effect of demographics on phonemic usage, ultimately seeking to understand the social situation of the Ammani youth. At right are Al-Wer’s projected paradigms for the variant phonemes; analysis is run on the 3SM conjugation.

Using a simple t-test with these averages, the null hypothesis will be tested for its p-value which will statistically analyze the elucidations of the glottal-initial verbs (Feagin). The t-test returns with Jordanian usage of /o/ over Palestinians’ usage at 0.070446575 which falls in the spectrum of inability to reject the hypothesis. While these data, with such a limited sample set especially, are not conclusive, it does indicate that Al-Wer’s assertion could be correct. These third generation Ammani youth seem to be identifying over a broader spectrum than their parents or grandparents and are thus the catalysts for the posited dialect formation of the region. With more analysis and study, these data could prove useful in aiding our understanding of the current linguistic situation present in Amman, supporting Al-Wer’s supposition of dialect emergence amidst dialect contact zones.

The project was a success in terms of being able to elicit the paradigm of verb conjugation from the participants. It is clear that there is a certain level of consciousness about the variance in conjugation types. However, few lay-persons are aware of where the issue’s history lies or its ramifications in the modern-day. 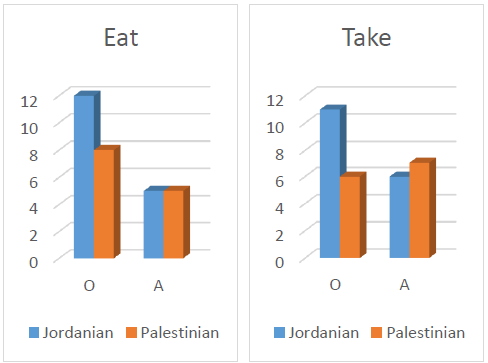 Often participants would switch their answers when they heard a more prestigious member of their peer group return a different phoneme than them. In fact, results indicate that in addition to the 1S and 3SM variation across Ammani youth, there is an extension of the pattern to all 24 forms (1, 2, and 3 persons) rather than the original 6 conjugation types.

The dialect contact region of Amman, Jordan is a fascinating flux of linguistic variation. With continued research on the subject, a clearer picture of the current situation and its consequences will emerge.