Shallowly embedded connections are a common and important connection of steel columns to reinforced concrete foundations, which can increase the building’s overall stiffness and strength. Until now, their contributions have been neglected because they are hard to quantify and study. Previous research at BYU (Barnwell 2015) has shown that the strength and stiffness available in these connections is greater than was previously assumed. A thorough understanding of these desirable properties would allow engineers to design buildings that are more cost-effective.

ABAQUS finite element (FEM) software was used to create models of the shallowly embedded connections studied by Barnwell, and study the stiffness of these connections under applied lateral loads. Unfortunately, as of the time of this report, no models have been generated that have been able to reproduce Barnwell’s results successfully. 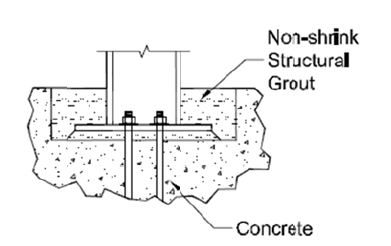 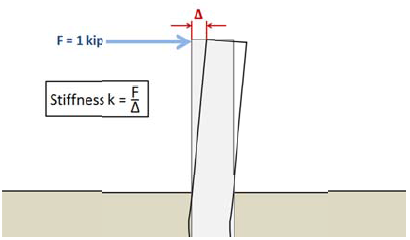 This project consisted of creating FEM models of shallowly embedded connections, subject to a lateral load, similar to Barnwell’s setup. The load was of a relatively small magnitude, allowing us to study the column’s linearly elastic response, without introducing nonlinear material effects. Use of Python scripting automated the model generation process by allowing automatic variation of important model properties, especially the column embedment depth. Automatic model generation allowed testing of many times the number of models than would otherwise have been possible.

Figure 3 shows that the actual recorded stiffness values obtained from Barnwell’s research varied significantly from what the model generated. The decrease in stiffness with increasing depth, which was especially notable in the case of the W12X58 shape-was considered to be more problematic than actual numerical discrepancies would have been. This decrease directly contradicts the expected shape of the stiffness curves. 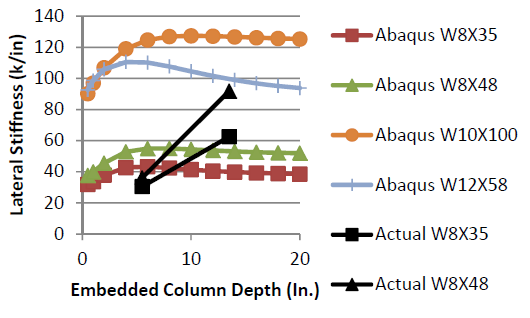 Modeling the concrete-steel bond represented a great challenge. One possible method was contact-based, where surfaces are free to separate after contact. The other method was tie-based model, which assumed that surfaces in contact never separate. Analysis of Barnwell’s test data suggests that the connection behaved more like a contact-based model, but it is possible that the actual connection required a more exotic model.

Another difficulty consisted in determining the precise behavior and response of the concrete to applied forces. The currently accepted formula for the Young’s modulus of concrete – a very important material property for these models – is highly empirical, and could have been different in Barnwell’s tests. Specifically, concrete that is confined can have significantly different properties than concrete that is unconfined, and the formula used for Young’s modulus fails to account for this.

Further research should be conducted to determine the root cause of this research’s failure. Investigation remains ongoing to determine what useful data can be gleaned from the modeling done up to this point. The Python scripts which have been created will expedite any further research occurring on this line of research.