One area of particular interest in modern physics research is creating a viable fusion system for sustainable energy. Fusion occurs when a high energy plasma is manipulated in such a way that small atoms collide together, combining to create larger atoms and releasing tremendous amounts of harvestable energy. However, there are many theoretical, mathematical, and practical roadblocks to creating a stable fusion experiment. One practical limitation and one mathematical limitation are as follows: practically, much of the energy used to create a fusion-grade plasma ends up in the kinetic energy of the electrons and is lost to the experiment; mathematically, the equations used to describe collisions between two atoms breaks down when the atoms collide at small or large angles. These two questions can help shed light on the difficult fusion question.

Fusion plasmas are extremely hot and extremely dense. My project aims to address both of the limitations, the practical and the mathematical, by using a lower temperature and density plasma to mimic specific parameters of fusion class plasmas. The low temperature and density regime is dominated by the kinds of small and large angle collisions explicitly ignored in fusion grade models. Analyzing the behavior of these plasmas may help create more robust mathematical models to predict the behavior in hot, dense plasmas. Additionally, using plasma made of two types of atoms, one light and one heavy, can act as an analogue to light atoms and electrons inside a fusion grade plasma. My project uses a magneto-optical trap with two atomic species, calcium and ytterbium, to serve as the low temperature and density analogue to fusion.

Magneto-optical traps, or MOTs, use strong magnetic fields and lasers tuned to specific frequencies to trap a small number of atoms in a vacuum for study. In this experiment two types of atoms are trapped at the same time and then ionized simultaneously, and then observed.

In order to get the atoms into the trap, an atomic source is inside the vacuum chamber is heated so that atoms are vaporized. However, they are traveling much too fast, and must be slowed down to be trapped efficiently. If atoms are moving too quickly not only will they not get trapped inside the MOT, they may dislodge other atoms that are trapped. In order to slow both the calcium and ytterbium atoms, we combined two ideas first put forth by Senaratne1 and Hill2. Calcium and ytterbium are loaded into a heated chamber inside an elbow joint. All atoms that are to leave the chamber are forced through an array of long, small capillaries that blocks atoms that are traveling in any direction but straight down the tube. Once the atomic beam is collimated in this way, only the transverse velocity needs to be reduced to around 30 m/s to have efficient trapping in the MOT. Using an array of permanent magnets precisely calibrated shown in figure two, combined with a laser, slows the atoms as the enter the trap. This system is called a permanent magnet Zeeman slower.

Through the ORCA grant, several iterations of the atomic slower were tested until ultimately the slower described above was designed, implemented, and calibrated. By the conclusion of grant period, both calcium and ytterbium signals were detected in the MOT chamber in sufficient numbers. The experiment is ongoing, and further tests are needed to determine if sufficient atoms are being trapped in the MOT for experiments to proceed.

The Zeeman slower is one critical piece of the larger dual species MOT experiment. The next and most critical step is to optimize the MOT chamber itself to get maximum capture of both calcium and ytterbium atoms, and then finally test how the two species interact together in as a plasma.

To conclude, the addition of the calibrated Zeeman slower is a large step forward towards the completion of the dual species MOT. In the coming months the final calibrations should be completed, and data can begin to be collected, ultimately serving as a useful analogue to describe difficult aspects of fusion plasmas. 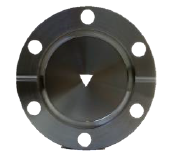 Figure 1 – Atomic beam source is provided by an oven containing calcium and ytterbium. The atoms are then forced the small triangle in the center. The triangle is filled with small, long capillaries to direct the atoms in a single direction. 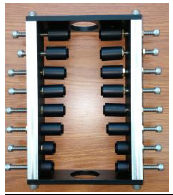 Figure 2 – Permanent magnet Zeeman slower. After passing through the capillaries described above, the atoms pass through the slower from top to bottom inside a tube (not pictured). The black tubes contain magnets precisely oriented to provide a very specific magnetic field. A laser propagates from bottom to top. The magnetic field keeps the atoms in tune with the laser. The laser imparts small, frequent momentum ‘kicks’ that slow the atoms by the time they enter the main chamber.