Vacuum Ultraviolet (VUV) is a range of light on the electromagnetic spectrum corresponding to wavelengths from 40 – 280 nm. VUV photons have too much energy to see visibly and are blocked completely by atmosphere. This wavelength range, however, shows promise for applications in space-based exoplanet research telescopes. Specifically, the chemical fingerprints that this light contains can tell us about the composition and formation of exoplanet atmospheres. 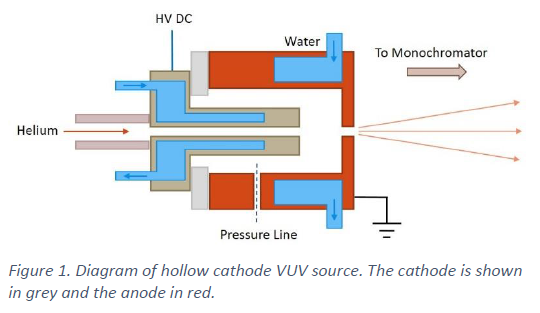 The free electrons of a metal interact with light as if it were a plasma: they reflect light well at low frequencies and are completely transparent at high frequencies. The frequency of light where this transition from reflecting to transmitting occurs is called the plasma frequency. The plasma frequency for pure, un-oxidized aluminum extends down to 85 nm, further into the VUV than any other metal and provides the best candidate for a broadband VUV reflector.

We want to experimentally measure the reflectance of un-oxidized evaporated aluminum metal films in the vicinity of its plasma edge. The first step is to develop and characterize an instrument capable of producing VUV light using a recommissioned near-normal incidence monochromator and a hollow cathode plasma discharge source. A cross-section of the cylindrical hollow cathode source I assembled is shown in Figure 1. The helium plasma ignites in the space between the grey cathode and the red anode.

The water coolant did a good job at keeping the main mass of the hollow cathode cool to about 30 C, but at currents higher than 1 A, the temperature of the metal segment of the gas inlet line dangerously increased to over 100° C. At about -1 kV and 1.8 A on the power supply, this metal tube began to glow red hot. We determined, for the present, to sacrifice light intensity for safety by operating at 1 A or less at all times.

Occasionally, the water coolant would not flow correctly either due to an operation error or an obstruction in the water line. When this occurred, the hot cathode would melt the polycarbonate insulating disk and physically deform it, releasing the vacuum to atmosphere and disrupting the plasma. We tried using a disk made of an expensive machinable ceramic called Macor®, but the design caused the disk to fracture when bolted down. In the Figure 1. Diagram of hollow cathode VUV source. The cathode is shown in grey and the anode in red. future, we will make the disk out of aluminum and then coat the front and back surfaces with Kapton® tape, a non-volatile, insulating adhesive commonly used in vacuum systems.

We initially observed around a 10% 120 Hz AC ripple on top of the 700 V DC, which ripple can affect the spectral characteristics and stability of the plasma source. We fixed this by placing a high-voltage capacitor in the circuit and providing better grounding and shielding for many of the other wires. The deviations in the power supply are now significantly less than 1%. Spots on the diffraction grating: While working on the monochromator, we observed little white dots on the surface of the diffraction grating, likely water deposits from a previous flooding event in the chamber. We saw that the spots did indeed scatter light and give us a higher background level for our spectroscopic peaks. 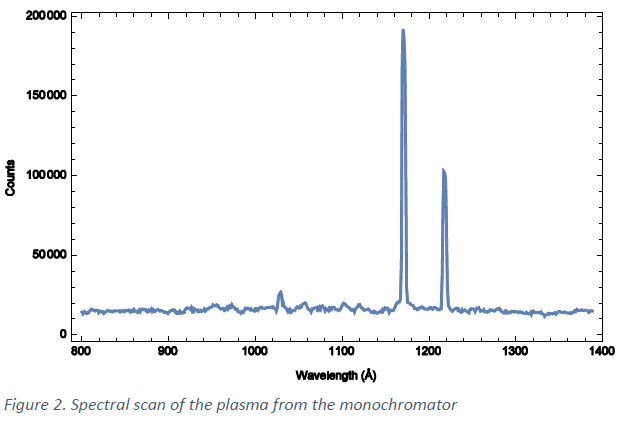 We measured the spectrum of our plasma VUV source. To do this, we placed the detector directly in front of the monochromator exit slit under a vacuum. We scanned the angle of the diffraction grating and recorded the number of photon counts from the detector at each wavelength. Especially at lower wavelengths from 0-800 Å, we saw a back and forth jumping pattern in the data that appeared to be a systematic data acquisition error. This pattern was especially clear around the dim peak at 584 Å, the 2p→1s electron transition of neutral helium.

This pattern became negligible at longer wavelengths. Figure 2 shows our spectral data from 800–1388 Å. We saw a small peak at 1029 Å as well as two large peaks at 1700 Å and 1210 Å. Since we are flowing helium into the hollow cathode, it was surprising that 584 Å line was so dim. Apparently, the energy had gone into other transitions. We identified the last line as the hydrogen Lyman α.

The other two peaks could be any sort of other contaminant such as carbon, nitrogen, or oxygen. We could not distinguish the atomic species comparing our data to the NIST Atomic Spectra Database.

Future work will need to be done once we have a reliable, contaminant-free system. This includes further testing of the diffraction grating in order to obtain consistent spectra from our plasma source. Different noble gases will need to be tested in order to find transition lines in the desired wavelength region. The chamber will receive an extension that will allow us to evaporate aluminum films while under vacuum.