NASA’s Decadal Survey emphasizes the importance of soil moisture measurements, citing their significance in predicting natural hazards and the role of soil moisture levels in the water and carbon cycles [1]. Soil moisture estimates are used for a variety of applications including drought detection, flood and landslide forecasts, crop yield monitoring, and rain precipitation models [1]–[4]. Orbiting sensors provide an effective way to measure soil moisture globally because measurements of each area can be taken at a relatively high revisit frequency (typically one to two days). These sensors are generally able to measure soil moisture parameters despite cloud coverage and, in some cases, vegetation coverage of the target area.

Both 12.5- and 25-km resolution global soil moisture products are presently being produced using a change detection algorithm developed at the Vienna University of Technology (TU-Wien) [5]. The products are processed using data from the C-band Advanced Scatterometer (ASCAT) sensors aboard the Metop-A and Metop-B satellites [6]. With the aid of the Scatterometer Image Reconstruction (SIR) algorithm, higher resolution images (4.45- by 4.45 km/pixel) of the radar backscatter coefficient (σ0) can be produced [7]. Exploiting ASCAT’s high-resolution image capability enables higher resolution images of soil moisture than are currently available to be developed. Higher resolution soil moisture images could potentially help to improve studies in such areas as crop yield prediction, drought prediction and localization, and modeling of the water table and water cycle. This report describes how the TU-Wien model can be adapted to create high resolution soil moisture images with ASCAT.

Data collected from both ASCAT and the European Remote-sensing Satellite (ERS) C-band scatterometers have been used to estimate relative soil moisture levels by applying a change detection algorithm to reported σ0 values [5], [8]. This change detection model (hereafter the TU-Wien model) exploits the dependence of σ0 on soil moisture levels: in general, σ0 increases as the amount of moisture in the soil increases [5]. The relative soil moisture in a particular area can be estimated by first normalizing all σ0 values to a nominal incidence angle. Then, the maximum and minimum backscatter measurements are found from a long time series of data collected from the area under study. An assumption is made that the highest backscatter value in the time series corresponds to soil which is saturated with water, and the lowest backscatter value corresponds to dry soil. For a given backscatter measurement, a relative topsoil moisture value (between 0% and 100%) is found by examining where the measurement falls between the measurements corresponding to dry and water-saturated soil. The volume content of moisture in the soil can also be extracted by multiplying the relative soil moisture value by the porosity of the soil [5]. In this way, a quantitative estimate of soil moisture can be produced using σ0 measurements.

The method for retrieving high-resolution soil estimates closely follows the TU-Wien model. High resolution (4.45- by 4.45 km/pix) C-band images of σ0 are developed by applying the SIR algorithm to ASCAT data. Using these images, a time series of σ0 measurements for each pixel are evaluated to obtain the soil moisture estimation parameters. A correction is applied to the parameters to compensate for an overestimation of soil wetness in arid regions, and the soil moisture is estimated on the 4.45- by 4.45 km/pixel grid.

The relative topsoil moisture estimates (ms) are produced at high resolution for land regions for every two days from 2009 to 2014. Each image uses 5 days of data to reduce coverage gaps, so consecutive images are produced using some of the same raw data. The high-resolution images are compared to the lower-resolution ASCAT soil moisture product produced with the Water Retrieval Package (WARP) version 5.5 [6] for validation purposes. Data from the WARP 5.5 ASCAT soil moisture product is used to produce images at the same temporal resolution, but using a courser 12.5-km grid. Low-resolution measurements are placed on the grid by averaging measurement values falling within each pixel. 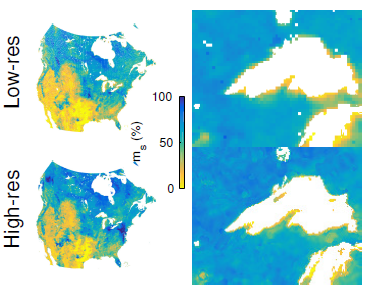 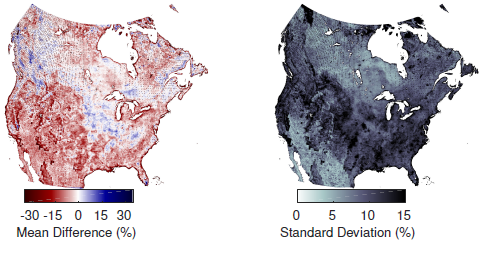