Avalanches are natural hazards that occur almost every year and are very destructive. They are the cause of death to many skiers and snow sports enthusiasts every year. They destroy buildings and other structures that are found in their path. Little information on how often they occur in specific areas has been gathered. It is important to try and build a chronology of avalanches in order to provide a greater public safety to those that live on and use the mountains every year.

Studies of avalanche frequency have increased in the last few years due to more development in avalanche prone areas. Studies have been done in Glacier National Park by B. A. Reardon, G. T. Pederson, C. J. Caruso, D. B. Fagre (2008). Another study similar to the present study was done in Argentina Mountains Casteller, by M. Christen, R (2008). There had not been much research in the Wasatch front in Utah. Through the principles of dendrochronlology we are attempting to build a chronology of an avalanche path in Woodland Hills UT on Loafer Mountain.

Samples were taken from downed trees found at the base of the avalanche slide that occurred in 2005. The trees had been uprooted by the avalanche and deposited at the base of the path in various debris piles, which allowed for us to retrieve them for sampling. “Cookies” or cross sections of the downed trees were cut with a chainsaw, then sanded and dated in the laboratory to assign calendar years to rings with evidence of avalanche damage. Common evidences we were looking for included scars, reaction wood, and growth suppressions. Scars result from falling debris hitting the tree and then killing living tissue directly underneath the bark. The tree then begins to heal by growing over the scar. Reaction wood is formed when a tree produces wider rings down slope to provide stabilization after tilting from an avalanche. Growth suppressions, reductions in ring width for several years, may also result when a tree is damaged.

The results that came from the project were exciting. Of the cross dating that we did we were able to successfully date 28 of the 30 samples and ended up with and Inter-series correlation of 0.53, which is a strong correlation. We were also able to establish a chronology of that avalanche path. This would help us in later determining the frequency of occurrences on this path as well as the magnitude. As discussed by Butler and Malanson (1987) and Butler and Sawyer (2008) we used 2 occurrences for each year in order to make an avalanche year significant as can be seen in figure 1. Using this method is significant because it allows us to see that multiple trees experienced the same avalanche event throughout many different years. This helped us to establish a greater idea of magnitude and frequency.

Through the results we were able to provide much needed evidence for city planning, the use of hazard mapping and avalanche defense, specifically for the city of Woodland Hills. This information could also be applied across the Wasatch front, and the state of Utah. This will also provide frequency of avalanche occurrences in Woodland Hills and across the Wasatch Front.

In the future we are planning on taking this a little farther and identify climatic conditions that produce avalanches along the mountains in Woodland Hill and along the Wasatch Front. We are also planning on visiting the Utah Avalanche Center to research historical avalanche records, attempting to link the historical record with the evidence we have found.

This research was presented in three different academic conferences. It was first presented in April of 2009 at the BYU Fulton Research Conference where it won second prize in the geography department. It was then presented in the AAG (Association of American Geographers) national meeting in Washington DC. In the National Conference it was entered in an oral presentation completion for undergraduates/graduates. During the competition this was the only undergraduate work entered into the competition. Most recently it was presented at a geography international conference in Finland by Dr. Matthew Bekker in April of 2010.

In addition to the research conference presentations we are continuing the research to find new ways to identify avalanches within the tree ring record. This research should be finished by April of 2011. Following the completion of the research an academic paper will be written and published hopefully in journals such as Natural Hazards and Earth Systems Science. 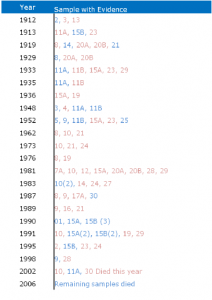