In the last several decades, laser cooling has become the primary tool for atomic research and, in our lab, has facilitated the study of ultracold plasma. Using a novel laser cooling setup, we created a vacuum chamber and related hardware for a dual species magneto-optical trap (MOT). The design of the MOT will allow us to improve trapping efficiency and atom density in our plasma, better understand laser cooling and trapping of calcium and ytterbium, and probe their interactions in ultracold hetero-nuclear plasma.

The project centered around creating a mechanism for trapping atoms and applying laser cooling to confine a gas at mili-kelvin temperatures. The new setup, however, first collects atoms in a two-dimensional MOT in order to deliver a low velocity high flux atomic beam for final trapping, as represented in the figure below. High temperature atoms are produced from an effusive oven source and then slowed and trapped by Doppler cooling from two counter propagating laser beams detuned from the resonant optical transition. The atoms are not cooled axially: instead a pair of push beams are employed to direct the beam into the main vacuum chamber where a similar configuration in three dimensions is used to stably confine the atoms before separate laser pulses are used to ionize them and create plasma. To accomplish this, we constructed an ultra-high-vacuum (UHV) chamber with three compartments: two 2-D MOTs as diagrammed in the figure below, and a main chamber with an integrated lens system to collect fluorescence from the plasma.

In addition to the setup described in our project proposal, we added several elements to the experiment for precision spectroscopy measurements. We installed three sets of Helmholtz coils around the trap to cancel background magnetic fields and hence remove Zeeman shifts in atomic energy levels. Since the center chamber uses an anti-Helmholtz coil to trap the laser cooled atoms, precision work also requires that this field be switched off quickly during ballistic expansion of the trapped atom cloud. A magnetic field switch, as described by Streed et al1 , was installed in the power lines, allowing us to turn off power in the field coils quickly, dissipate the inductive energy, and protect the circuitry from surges in voltage from the rapidly changing magnetic field.

The field at the center of the chamber was measured using a miligauss meter. By adjusting the current through the Helmholtz coils, the background field at the trap center was set to zero field to within 20 miligauss (20 microtesla) in each orthogonal direction (By comparison, the earth’s magnetic field is about 500 mG). The UHV chamber was completed earlier this year, and each separate compartment of the experiment was pumped down individually to achieve ultimate pressures of 540 nanotorr and 21 nT in the 2-D MOT chambers and 23 nT in the main chamber. When we raised the temperature for the calcium oven, we were able to observe fluorescence in the emitted flux. For the ytterbium chamber, however, a film developed on the windows. We removed the windows and baked the chamber before again raising the temperature, but the pressure in this chamber is still well above the other two. Further modifications may be necessary before we can operate the ytterbium MOT. Progress on completion of the project was also reported at the 2014 APS Four Corners Section meeting, and was recognized with an undergraduate presentation prize. 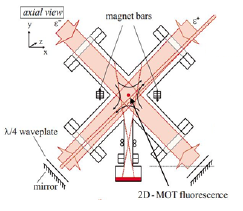 Figure 1 – Figure from Tiecke et al.2 demonstrating the principle of the 2-D loading MOTs, including the calcium oven below and the magnets needed to create the quadrupole field 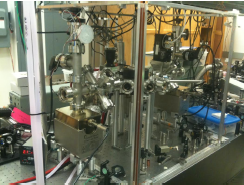 Figure 2 – Completed vacuum chamber. One of the 2-D MOT crosses is visible in the forefront of the image

With the chamber completed and fully functioning for the calcium MOT, we will install the necessary optics to trap and ionize the calcium in the main chamber. The magnetic field bias coils and field switch now allow us to measure calcium’s transition frequencies to within 100 kHz, whereas in our former setup the magnetic field limited measurement to uncertainties of about 500 kHz. Since we do not yet have the full laser system to trap and ionize ytterbium, we are not yet ready to develop the dual species plasma experiment. When we develop these capabilities, we will be able to probe a new regime in strongly coupled systems. By studying the dual plasma, we will be able to gain new insight into electronion transport in plasmas, as represented by the interaction of the two species with differing masses. The system will also allow us to study Ca-Yb molecular formation and provide an analogue to other strongly coupled systems, like Mott insulators or the BEC/BCS crossover regime.

In the course of our project, we successfully completed the vacuum chamber and observed fluorescence in the atomic species under consideration. We will be able to fully test and optimize the 2-D/3-D MOT configuration at the beginning of next year, after which we will be able to conduct several promising experiments.