Introduction
A new mass spectrometry technique (VENDAMS) has been developed to allow the quantification of rate constants for complicated chemical reactions. Due to the expensive nature of the method, computer experiments designed to solve a set of equations provide supplemental information to the process.

The computer simulator takes as inputs the rates of a variety of chemical reactions occurring in the mass spectrometer. Since the rates are assumed known, we run the simulator many times at many different rate constants. The simulator and the physical process return measurements of the relative abundance of several anions.

A Gaussian Process is a exible tool for high dimensional input spaces with nice mathematical properties. Using a GP we can effectively model unknown random functions. Posterior distributions for the model parameters are obtained via Markov chain Monte Carlo.

Results
The model is fit using observations from a bromine- uorine-chlorine compound. There are theoretically many chemical reactions occurring in the mass spectrometer, but only few of which will contribute significantly to the end product. Nine reactions were assumed for the computer simulator. Of these nine, only four or five had a 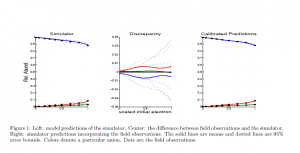 significant effect on the outcome while the others acted as random noise. Figure 1 shows the statistical predictions at various initial electron concentrations.

We see that the simulator does well at predicting the relative abundance of this particular compound after being sent through the mass spectrometer. Though minimal, the discrepancy between reality and simulations increases as the initial electron concentration increases. This could suggest that not all significant chemical reactions were accounted for in the computer simulator. Despite this, when combining the computer simulator with the field observations, the model does excellent (with low variance) in predicting relative abundance.

The VENDAMS technique allows the estimation of previously unknown rate constants. The statistical model given above can be used to calculate probability distributions for these rate constants. Since the computer simulator is computationally cheap, we can obtain an overwhelming amount of simulations. In estimating the model parameters we use a small, random subset of the simulation data. We assume there is no variability in the computer model so running the analysis on a small portion of the data performs just as well as using the entire dataset in much shorter time.