Many scientists throughout the world are currently doing research on ultra cold neutral plasmas (UCNP). These plasmas are difficult to make and require quite a sophisticated setup. A method that we employ in our lab requires multiple laser pulses to be timed perfectly and aligned precisely in order to ionize the atoms. It also requires the use of a magneto optical trap, which traps the atoms before they are ionized. This setup is very time consuming to build and maintain but we have a mathematical model for it. Since the current methods of creating ultra cold plasmas are hard to use, we set out to show that a much simpler method is available in certain situations. Our goal was to show that, using strong field ionization, it is possible to create neutral plasmas at room temperature that can be described by the same mathematical model as UCNPs.

We started with 35 femto second Ti:sapphire laser pulse which we directed into a beam splitter to create two beams. The first of these two beams we called our ionizing beam and was used to create the plasma. The second beam passed through a delay stage and was then directed into our interferometer. Using this interferometer we created the base fringe pattern shown in Fig. 2. As we passed this pattern through the plasma the fringes would shift by an amount proportional to the index of refraction of the plasma. We then delayed the arrival time of the fringe pattern allowing the plasma to expand and the density of the plasma to drop. This caused the index of refraction of the plasma to decrease and the shift in fringes to lessen. Figure 3 depicts the normalized shift in the fringes as we delayed the arrival time of the pattern. 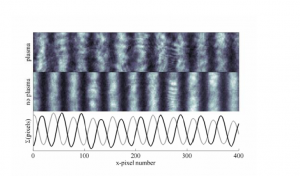 We found that plasmas created using this method do follow the mathematical model for an ultra cold neutral plasma. These results are significant because they show that there is a relatively simply way to create “ultra cold” neutral plasmas for research purposes. Another benefit to our method is that, using strong field ionization, the gas being used can be switched for another without the need of purchasing a new laser with the proper wavelength for that specific gas. 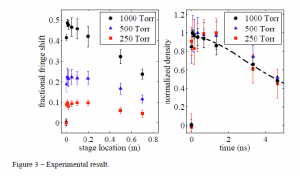 Knowing these results, we would like to continue working with this set up to see if we can control the electrons’ temperature as they leave the atoms. To do this, we will need to increase the intensity of the laser and slightly modify the experimental setup. We have modeled this experiment and feel confident in obtaining conclusive results.