Since the majority of the pavement network in the United States is already constructed1, most of the attention has turned toward maintaining and reconstructing existing roads. Through routine maintenance of the wearing surface, the life of a pavement is greatly extended and long-term costs greatly reduced. Pavement maintenance treatments range from quick and inexpensive crack-sealing to more intensive surface milling followed by a costly asphalt overlay. One treatment recently put to mainstream use in Utah is microsurfacing. Microsurfacing is often described as the most durable and stable of the available slurry seals. Like other slurries it protects against water ingress, retards oxidation of asphalt, adds skid resistance, improves pavement aesthetics, and delays crack propagation. Microsurfacing, in particular, resists shear deformation and thus can fill pavement ruts and be applied in high-traffic urban environments.

The life expectancy of microsurfacing varies greatly2, 3. Personnel within the Utah Department of Transportation (UDOT) have reported a wide range of expected performance. Reports of fatigue and delamination failure after only 3 or 4 years of service have been made. On the other hand, other UDOT officials have reported over 10 years of acceptable performance.

The variation in reported microsurfacing life may likely be tied to variations in local traffic, climate, and the condition of the pre-existing pavement. Only one study has addressed the effects of traffic and climate2. Even then, the only properties analyzed were average annual daily traffic (AADT) the mean annual temperature. Important factors, not studied, include the degree of heavy truck traffic, the air-freezing index (AFI), and average annual snowfall. Snowfall is important since it could be related to the presence of snowplows and deicing salts. The literature does not contain studies which address the effect of the condition of the pre-existing pavement.

Given the apparent deficiency in the literature, the objective of our research is to assess the effect of the afore mentioned conditions on the service life of microsurfacing. Based on a given set of conditions, we could then give state and city officials a good idea of when the treatment should or should not work well. Pavement maintenance personnel can correctly analyze the given factors and decide whether or not the situation warrants microsurfacing.

Several new and existing microsurfacing projects throughout northern Utah were evaluated. The projects selected had a wide range of climate and traffic properties. The microsurfacing was also applied to pavements with a wide range of initial pavement conditions. Surface properties were measured in the outside lane in a 250 stretch of road. These measurements were then input in a model created by UDOT to calculate the overall condition rating (OCR) of the pavement. The OCR is an index between 0 and 100, where an index of 100 represents a pavement in perfect condition. A statistical analysis of the results could not be performed because of insufficient data to achieve statistical significance.

Plots of OCR at variable stages of service were created in which the data were plotted according to the different conditions, such as high/low truck traffic, high/low AFI, etc. Most of these plots did not show interesting trends, however, the plot of pavement performance according to the pre-existing pavement condition was interesting, and is shown in Figure 1. In this figure, “Poor” represents situations where the pavement was significantly cracked prior to construction. “Fair” indicates the pavement had some cracks, but not as developed as the “Poor” condition. Finally, “Good” represents a situation where microsurfacing which was placed on an essentially new surface. As seen, when the pre-existing pavement was “Poor,” the service decreased much sooner than for cases where the pavement was in “Fair” or “Good” condition prior to construction. 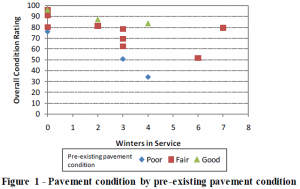