Introduction.
Mirror symmetry is a phenomenon first observed in theoretical physics, which has garnered interest among mathematicians. The Landau-Ginzburg mirror symmetry conjecture proposes two algebraic structures which are isomorphic, or in some sense “mirror” each other. These structures are built from polynomials and corresponding symmetry groups. 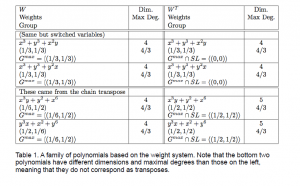