The development of a light woodstove that is able to be conveniently packed is of great importance for anyone in an emergency situation. The ability to purify water by boiling it, cook food, and reduce food weight by bringing dry ingredients could dramatically increase the chances of survival. My stove provides all these benefits at very low cost – it is an easy choice in packing an emergency essentials kit.

First we had to assess what was most important in such a stove. After some time we realized that, though it would be rather straightforward to test the efficiency of various designs, that was not most important. It takes a relatively small amount of wood to boil a few cups of water, which can be found nearly anywhere. Small twigs are all that is required, often with as little as 150 g of wood. In an emergency situation the user would not be so concerned with how much wood is required as he or she would be with how quickly a small pot of water could boil water. Still, by testing each stove with a constant amount of identical, controlled wood (75 g), the only variable to be tested was air flow. By keeping the amount of wood constant we could see the true capabilities of each stove in its ability to elevate to a high temperature in a short amount of time.

To measure this, we placed thermal couplings at different points inside the stove, including in the center just below the pot (this was the reading we were most interested in). After igniting a flame, we fed 75 g of wood into the stove as fast as was possible, resting a pot with non-boiling water on top of the stove. We decided to measure the temperature instead of time required to a boil a constant volume of water because it provided us with more information. For example, boil time only provides us with a number (even though it is ultimately the most important number), but by measuring the temperature we could track the efficiency throughout the burn. This was especially useful in comparing designs with little airflow to those with high airflow, as they behaved very differently over time.

Mathematica to process the collected data, I could better observe the performance of each design. 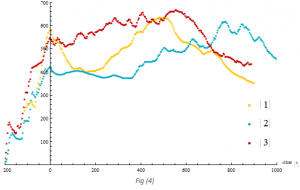 Temperature/time analysis was especially useful in comparing design (2) with design (3).Figure (4) shows a plot of temperature versus time for all three of the above designs. The wood sits on a grate 0.5” above the ground, and time = 0 for all tests at the moment when a pot of water was placed on top of the stove.

It can be seen that design (2), which has the least opportunity for airflow, struggled to elevate internal temperature even with nothing blocking the top. Design (1), on the other hand, gained a high temperature quickly but suffered a sharp reduction in heat output immediately upon blocking the top with a pot. Against what we had originally expected, design (3) was most effective at maintaining a high temperature in the beginning stages of a burn. Though it drops off before the other two designs, this is of little concern because (as mentioned above) it is easy to obtain more wood to continue the burn. Of utmost importance in an emergency situation would be speed, not efficiency.

Now that a practical airflow model has been established, it still remains to find a more durable (yet affordable) metal to use. Since the stove must be packed flat, the four panels will detach from each other, clipping in to four more robust posts on the corners, which are designed to hold the pot with ease. This allows for the manufacture of the panels with a lighter metal, the retention of structural integrity, and the ability to pack it in a convenient, flat shape.

The stove has come a long way since the first designs and even since its presentation at the Utah Conference for Undergraduate Research 2014, and I’m excited to distribute it to missionaries as part of an evacuation kit.

A special thanks goes to Dr. Jones for his help and to the BYU Interdisciplinary Global Engineering Solutions research group for allowing me to use their measurement equipment and burn facility.