Alcohol addiction is becoming increasingly prevalent in our world today, but the mechanisms underlying alcohol addiction are unknown. We do know; however, that the gamma-aminobutyric acid (GABA) neurons in the Ventral Tegmental Area (VTA) of the brain are specifically involved in addiction. These GABA neurons have a constant inhibition from other cells in the brain, and it is this inhibition that I am specifically studying. The term used to represent the inhibition from other cells is spontaneous inhibitory postsynaptic currents (sIPSCs). By looking at the sIPSCs on a VTA GABA neuron in response to alcohol administration, I was able discover more about how alcohol acts in the brain.

The technique that I used to carry out my research is called whole cell patch-clamp. This technique involves dissecting a mouse brain into thin slices. A slice is then placed under a microscope, where it is kept in an environment to simulate its normal physiological conditions. I am then able to record from one of the many neurons in the brain and then see how it reacts to different conditions. 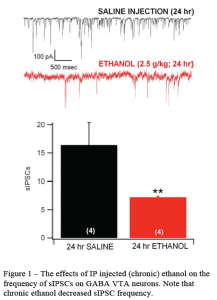 First, I studied the effects of chronic (longterm) exposure to alcohol on the VTA GABA sIPSCs. In order to create a chronically treated
mouse, we gave intra-peritoneal (IP) injections of alcohol previous to our study of the individual GABA neurons. We then discontinued the injections to allow the animal to go into a withdrawal state. This would be similar to a person drinking alcohol regularly over some period of time and then stopping. We first recorded the frequency of sIPSCs from mice that had been injected with saline as a control. Then, we recorded sIPSCs from the mice that had been injected with alcohol. We found that the alcohol injected mice howed a significant depression in GABA sIPSCs (Shown in figure 1). We were also able to replicate these results by presoaking brain slices in an alcohol bath for one hour prior to experimentation (See figure 2).

Next, we studied the effects of acute alcohol on the VTA GABA sIPSCs. We created an acute administration of alcohol by simply bathing alcohol the brain slice in alcohol for a few minutes. This is very similar to a person consuming one alcoholic beverage. We first
recorded sIPSCs from GABA neurons that had no alcohol washed over them, and then we recorded GABA neurons with varying amounts of alcohol washed over them. We saw that low doses of alcohol actually would decrease the sIPSCs, but it was not statistically significant. High doses of alcohol did nothing to the sIPSCs (Shown in Figure 3). 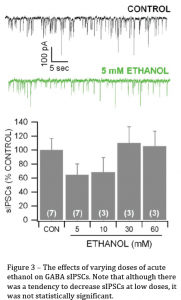 We can see that our brain is making shortterm changes when exposed to chronic alcohol. We can specifically see from this study that a chronic exposure to ethanol is creating a decreased amount of inhibitory signal (sIPSCs) onto GABA neurons in the VTA. Again, these GABA neurons, which are experience this short-term change, are responsible for the regulation of addictive behaviors. Thus, this study has given a better understanding of how addiction is occurring in our brains.