My ORCA research project was presented as a poster at the annual International Meeting For Autism Research (IMFAR) in San Diego on May, 2011, under the name, “Candidate Gene Associations with Performance Monitoring of Others in Autism.” I am currently working with my mentor, Mikle South, to determine the feasibility of publishing this work in a scientific journal. The remainder of this report is taken largely from the poster presented at IMFAR.

Twenty eight children and adolescents diagnosed with a research-criteria ASD (mean age 13.15, IQ = 108.82) and 28 age- and IQ-matched typical participants were used in the study. The task we used was a modified version of the Eriksen Flanker Task (Eriksen & Eriksen, 1974): flanker arrows point one direction, and a middle target may point the same (congruent) or opposite (incongruent) direction. A female confederate pushed the left or right button to indicate the direction of the target arrow, while the participant watched. The confederate deliberately made errors on one third of the trials. Feedback about correct/incorrect trials was presented on the screen following each trial. The participant was told to mentally track the “partner’s” errors. EEG data was collected from the participant using a 128-channel EGI net. Oragene saliva kits were used for DNA extraction. Eight SNPs implicated in ADHD research (Robison, et al., 2010), including COMT and MAO-A, were then genotyped.

Single factor ANOVA analyses revealed differential genotype x oERN response patterns across groups. For COMT, the ASD group does not show significant difference between val and met forms, as does the typical group (see graph below). For MAO-A, the ASD group with the G variation shows a significantly reduced response to error trials, which is not the case for the comparison group. There is trend-level significance for the interaction of diagnosis and MAO-A genotype for oERN error trials (F=3.61, p=.06). 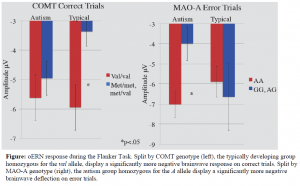 Our study suggests COMT and MAO-A are expressed differently in ASD than in typical development. These genes regulate enzymatic action in the synapses of dopaminergic neurons and are critical for emotion regulation. For example, variation in COMT may influence interactions between limbic system and prefrontal cortex, both of which are implicated in ASD. This could help explain why many individuals with ASD struggle with recognizing and interpreting the actions of others in social contexts. This is another of several recent findings that show similar behavioral outcomes in ASD in the context of vastly different neural responses. Broad measures of autism (e.g., categorical symptom checklists) are unlikely to have reliable associations with genotype; therefore future research needs to target specific error-related potential phenotypes to provide insight into the association of genes and brain activity.