Space weather is of great interest due to its effects on orbiting satellites. The charged particles thrown off from the sun during eruption events like solar flares and coronal mass ejections (CMEs) can damage and destroy the electronics aboard spacecraft. They also warp Earth’s magnetosphere and create the dazzling auroras. Knowledge of the processes during solar eruptions is significant in order to predict space weather events.

Magnetic reconnection in coronal plasmas is the leading mechanism for energy release in solar eruptions. Magnetic reconnection occurs when magnetic fields oriented in opposite directions pinch together, split, and reconnect. As the fields relax, they drag the plasma and release energy. On the sun, this can launch a plasmoid into space and leave behind flaring, bright, coronal loops. To model these events, it is crucial to have observational methods to probe the magnetic field strength within the solar corona. Although magnetograms from the Helioseismic and Magnetic Imager (HMI) yield information about the magnetic field on the solar photosphere, there is uncertainty in the models that propagate the magnetic field into the corona.

I, along with Dr. Nick Murphy and Dr. Mari Paz Miralles from the Harvard-Smithsonian Center for Astrophysics, used NIMROD simulation code to model magnetic reconnection in the solar corona. NIMROD stands for “Non-Ideal Magnetohydrodynamics with Rotation and other Doohickies.” This describes the behavior of conducting fluids like plasmas using Maxwell’s equations and fluid hydrodynamics. When applied to the solar eruption events where the reconnection is asymmetric, several signatures were noted including distortion of post-flare loops, asymmetric motion and brightness of loop footpoints (the points where coronal loops end on the photosphere), drifting, and circulation in rising plasmoids.

In this study, we compared observations from the Atmospheric Imaging Assembly (AIA) on the Solar Dynamics Observatory (SDO) to the results of the simulations. We selected two events that exhibited a candle-like cusp in the post flares loops in order to answer the following questions: Can we find evidence of asymmetric reconnection in observations? How well do the post-flare loops from the simulations agree with the observations? Can we determine the ratio of magnetic field strengths on the two sides of an observed post-flare loop?

The two events we chose were from 6/7 Dec 2010 and 7 Mar 2011. We analyzed these events in X-Ray and Ultraviolet wavelengths and selected loops to obtain traces. We then wrote a computer algorithm to automatically match the NIMROD simulations to the traced post-flare loops in order to determine the rotation of the loop, the loop height, and the total asymmetry in the magnetic field. In writing this algorithm, we assumed that loops are isolated from the surrounding magnetic fields and that the magnetic field lines were tied to the solar surface, which means that the footpoints in the simulations match the footpoints on the observed photosphere.

Of the 12 loops traced in the 2010 event, we found matches for eight of them. Six of the seven 2011 loops had a match. Most matches indicated a strong magnetic asymmetry, but we decided to further constrain these matches using observations from the two Solar Terrestrial Relations Observatories (STEREO). These satellites are positioned ahead and behind on Earth’s orbit and observe the sun from different angles. By having more than one perspective, it is easier to constrain the rotation angle of a post-flare loop and avoid projection effects.

In conclusion, we found that we could match most observations with the NIMROD simulations. Cases that showed evidence of external magnetic fields interacting with the post-flare loops were the exception. We also determined that this method could be used to get a rough estimate on the magnetic field asymmetries. The 2010 event had a magnetic asymmetry of about 4:1 and the 2011 event roughly 1.5:1. In combination with other signatures of asymmetric magnetic reconnection, this can yield a method to determine magnetic field asymmetries in the corona from observations.

This work will be presented in the form of a poster at the American Astronomical Society meeting in Long Beach, California in January 2013. 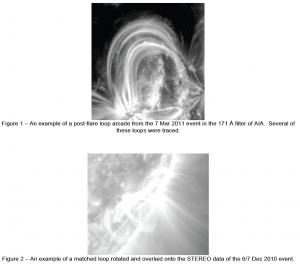