The goal of this project was to stabilize a laser to use as an ion probe. The first part of the project was completed with some success, though the rest had to be postponed until other parts of the experiment are completed, and I have since turned my focus to those.

The end goal of our laboratory group is to create an ion interferometer from a stable low velocity ion source. Such a device has not been made before and will allow us to perform various ultra-sensitive experiments and measurements involving electric fields. The ion interferometer requires various laser and electronics systems all of which have been built by us in lab. Due to the need to design and build our own electronics, vacuums and various other systems the project moves forward slowly and there are often setbacks.

The goal of my ORCA project was to put together and test the laser system that is to be used to probe the ion beam at the end of the interferometer. As such, it can’t really be tested until we have ions to test it on. There were various things that needed to be done to prepare it, however, and those will be detailed below.

The temperature and current stabilized light is then reflected off a diffraction grating (see figure 1) which produces various beams split at an angle dependent on wavelength (or ‘color’), in addition to the main reflected beam. The grating is adjusted so that the diffracted light from the grating is fed straight back into the diode, which causes the diode to laze at the frequency of the light being fed back into it. Controlling the angle of the diffraction grating then allows some control over the frequency of the laser. This, in addition to the temperature and the current allows us to tune the laser to the correct frequency.

The difficulty of this method of laser tuning and stabilization is that the system of variables (current, temperature, horizontal and vertical grating angles) is over determined. We want to solve for one outcome, the right frequency, but all of those variables interact in non-trivial manner, making it vary tedious and time consuming to find the right combination. In addition, when we get the laser to the right frequency, we need to optimize it in order to scan it back and forth by a slight amount without losing the stability. I spent a significant amount of time achieving this and characterizing it.

With the ion probe ready to be tested, I shifted focus to the main laser system used to trap and cool the Sr atoms. We have had a lot of difficulty with this system, and cannot move on until we get it working correctly.

The main laser system works similarly to the one described above, except with a couple layers of added complexity, including a laser amplifier and a doubling stage (to produce blue light from an IR laser). These additions significantly complicate the process of tuning and stabilizing the laser. Most of the initial work on the laser was completed by Chris Erickson, a former graduate student working in our lab. I took over his project when he left.

While there is still much work to be done, I have successfully retuned the laser to achieve strontium fluorescence (see figure 2), but have not yet been able to achieve the stability needed to lock the laser. Because of the various difficulties involved, I’ve decided to back up a little and replace some of the electronics for the locking and scanning circuits with newer versions we have recently designed. My hope is that with these new circuits, which fix some of the problems we have found with the previous versions, we will be able to stabilize the laser more than we were able to before. 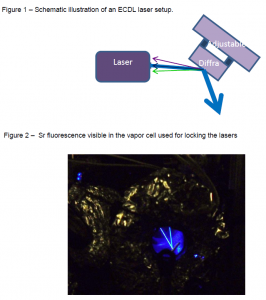