Military jet aircraft are some of the fastest vehicles ever made. Their jet engines exhaust fuel at supersonic speeds and create large amounts of noise. However, this noise is loud enough to cause hearing loss, even with the most advanced levels of hearing protection. In particular, hearing loss is a problem that many military aircraft workers experience. This research is part of a larger project that is analyzing the sound field around these jets in order to address the problem. The purpose of this research was to reconstruct an equivalent sound source for the jet. This modeled sound source is used to calculate the radiated sound field around the jet. An analysis of the sound field allows military officials to make informed decisions about jet protocol and where to place workers during a take-off.

The first step in analyzing the source of jet noise is to investigate measured data. The F-22 Raptor jet was the aircraft studied in this project. In 2009, faculty and students from Brigham Young University went to Holloman Air Force Base to take measurements of an F-22 Raptor jet. A full description of the measurements is given in Wall.1 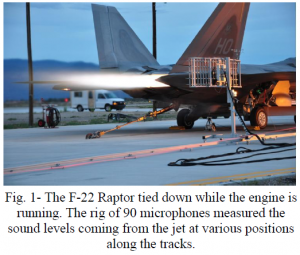 The F-22 measurements are the basis for understanding the sound of the jet. The particular method used in this research was based on the mathematical model presented by Morgan et al2. The mathematical model represented the source as a line of monopoles. The parameters of these monopoles are then adjusted until they predict the measured results. This is called creating an equivalent sound source.

This equivalent source method can give a large amount of information about the jet and its sound field. However, the initial implementation of this method took a lot of manual work because the parameters were adjusted individually until the prediction matched the measurement. This took a very long time because it needed to be done for multiple frequencies. My research automated the process of creating the equivalent source. Instead of manually modifying parameters until the prediction matches the measurement, the created algorithm analyzes the data and adjusts the parameters until it finds the best solution. This algorithm was used for the many frequencies and engine conditions of interest.

The automated algorithm implemented is a Bayesian optimization algorithm (BOA). It uses simulated annealing and fast Gibbs sampler algorithms to determine the best solution and the certainty of that solution. These two pieces of information determine the meaningful parts of the model that can be used to understand the jet.

Much of my research was devoted to implementing the BOA and verifying that it was working correctly. Many optimizations were made to make the BOA run faster and more efficiently. After the algorithm was verified and optimized, super computers were used to generate the equivalent sound source models for the frequencies 100 Hz, 125 Hz, 200 Hz, 315 Hz, 800 Hz, and 1250 Hz.

As expected, the algorithm generated equivalent sources that accurately represent the sound radiated by the F-22. This can be seen by comparing the sound field predicted by the model against the measured results as shown in Figure 2. The predicted and measured levels agree remarkably well.

This research is exciting because it can bring further understanding of the sound generated by military jets and be used to predict levels in cases where measurements have not been conducted. The methods and results of this research have been presented at multiple conferences including the National Conference of Undergraduate Research and the American Physics Society Four Corners Conference. This research has also been accepted to be presented at the International Conference of Acoustics at Montreal, Canada in June of 2013. The author is also preparing a senior thesis and a journal article based on the findings of this research. 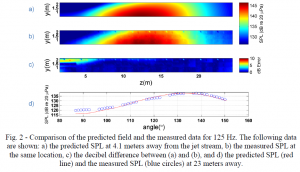