We present results from monitoring the spectra of Mrk 1210 with the Green Bank Telescope (GBT) and through the construction of sub-mas resolution maps with the Very Long Baseline Array (VLBA). The purpose of these observations was to determine the accelerations, distances, and angular displacement of the H2O megamasers in the central black hole accretion disk. By modeling these parameters we are better able to understand the dynamics of the megamasers in a potential molecular disk. The VLBI observations show that these masers lie within the inner 0.8 pc of the nucleus. We present possible models for such a system and report a black hole mass of approximately 1.3 × 10^7M⊙. This work was started as an REU project for the NRAO in Charlottesville, VA and continued as a ORCA grant project at Brigham Young University.

The theoretical and observational goals of monitoring extragalactic H2O megamasers are discussed in Reid et al. (2009). Due to a lack of detectable systemic megamasers in the VLBI map of Mrk1210, our observations were done strictly to estimate a black hole mass and not for cosmological purposes. Mrk 1210 has been classified as a Seyfert 2 galaxy. According to the unified model of active galactic nuclei (AGN), type 1 AGNs are seen as having a face on nuclear disk and have both narrow and broad emission lines, while type 2 AGNs are seen edge-on and have only narrow emission lines, which are commonly believed to be intrinsically the same as type 1 AGNs. Wu et al. (2011) Therefore, by definition, we expect that the AGN will be viewed as edge on or nearly edge on. Because of this we expect to see a Keplerian velocity distribution for the megamasers, which lie along the midline of the disk. Our research lead us to possible models that could potentially match the observations.

Our VLBI observations of Mrk 1210 were done at 3 separate epochs using the 10 VLBA antennas under the project BK0163. We reduced each VLBI dataset individually using the NRAO Astronomical Image Processing System (AIPS).

As mentioned previously, the GBT spectra were used to measure the accelerations of each individual maser. The velocities of the maser features were determined by fitting a Gaussian profile to each feature. Specific maser features were then tracked through each observation and the acceleration and error were measured by fitting a line through each of these points.

The orientation of the maser features in the VLBI map in combination with the features shown in the GBT spectra may suggest that the maser spots are located in the accretion disk of the AGN with some inclination angle. Additional evidence that the masers lie in a nearly edge on disk is given by continuum maps by Middelberg et al. (2004). The con- figuration of the disk is nearly perpendicular to the continuum emission and suggests that it may be due to some outflow from the disk. Since the red and blue maser features have almost an equal difference in velocity from the recession velocity of the galaxy, we can make the assumption that they are an equal distance from the AGN along the midline of the disk.

Applying the Data to the Model and Conclusions

We calculated a distance 55.3 Mpc to Mrk 1210 by using Hubbleʼs law with a value for Ho of 73 km s^ (-1) Mpc^(-1) as shown in Freedman et al. (2001). Using this distance measurement, the linear distance from the blue and red shifted masers to the central AGN was determined to be 0.7955 pc. From the VLBI map we can determine that the projected distance of the orange maser spots along the midline of the disk is 0.6398 pc. With a velocity of approximately 182.8 km s^(-1) we found that the orange masers are 0.6060 pc from the midline of the disk. Using this model in combinations with the VLBI map, it was determined that the disk has a tilt of 8.7 degrees. We then determined that the true velocity of the highly red and blue shifted masers is 268.8 km s^(-1). By using this velocity in equation 1, this gives a black hole mass of 1.3 × 10^7M⊙.

With very few observations, additional observations of Mrk 1210 would be extremely beneficial. With more observations and accurate parameters, better constraints could be put on our disk model and give us greater confidence that the disk we propose is real. 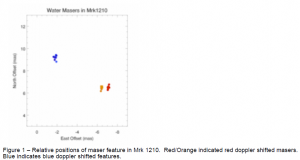