The hammered dulcimer is a stringed instrument of the zither family, typically consisting of a wooden trapezoidal body with metal strings stretched across the frame. A typical dulcimer can span anywhere between 2 1/2 and 5 octaves, depending on the size of the instrument. The dulcimer used in our research is a 16/15 (meaning it has 16 courses of strings of the treble bridge and 15 across the bass) Songbird Phoebe built specially for our project by Christopher Foss of Muscatine, Iowa. The dulcimer is made of Baltic birch and has two strings per course. It has six sound holes: two on front and four on back, one of which serves as a carrying handle for the dulcimer.

It is a common notion in the dulcimer community that the sound holes are decorative only and serve no acoustical purpose. The idea that holes in the soundboard and/or back of the instrument are acoustically insignificant seems suspect to us at the outset, considering the importance of sound holes in other well-studied instruments such as the guitar or violin. Consequently, investigation of this claim is the key motivator for this research, as it could impact future dulcimer design.

To investigate the radiation of the dulcimer, we use two analysis techniques. First, the characteristic spectrum of the hammered dulcimer is found through a swept-sine analysis to examine the overall spectral response of the instrument and to identify resonances. To characterize the causes of these resonance peaks, near-field acoustical holography (NAH) on the front and back of the dulcimer is employed. The results show that the low-frequency structural modes are relatively inefficient radiators and that the sound holes contribute significantly to the overall radiation.

Overall, we have shown that the sound holes do play an important role in creating the overall sound of the hammered dulcimer. They clearly help radiate the sound of the dulcimer in certain frequency ranges. Hopefully this research will help to correct the misconception that the sound holes serve only decorative purposes. We will be publishing these results in the Journal of the Acoustical Society of America, which is a notable peer-reviewed journal. 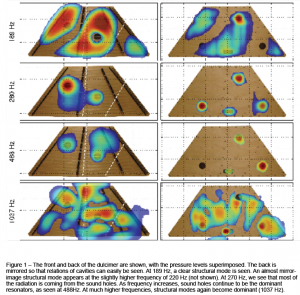