Solvent extraction is a widely used method of separation in which a given target substance is extracted from a mixture and transported across a liquid-liquid interface into a separate liquid. Typically, the two immiscible liquids are shaken or stirred vigorously to increase contact between the two liquids. This contact is vital to extraction of the target substance and much time and effort is expended in increasing extraction efficiency through improved contact. We have developed a novel method of solvent extraction which makes possible the extraction of large amounts of the target substance in very little time without shaking or other agitation. It exploits the properties of unique liquids which are immiscible with water at room temperature but become completely miscible at elevated temperatures.

Several liquids which exhibit this unique coalescent property where tested for extraction efficiency. Two liquids, 2, 4-pentanedione and glutaronitrile, showed particularly high efficiency and potential for practical application. This novel use of coalescence extraction was compared to traditiona! solvent extraction systems both in terms of the quantity of cations extracted and the time required to perform such extractions.

Extraction procedures involved mixing equal amounts of an aqueous 31.0 mM lead nitrate solution and the liquid being tested. Dicyclehexano-18-crown-6 (DC18C6) was dissolved in the organic liquid at a concentration of 10.0 mM to serve as an extractant. The mixture was then heated until complete miscibility was observed and then immediately removed from the hot plate. After allowing the solution to cool to room temperature, the solution was centrifuged for 30 seconds.

The quantity of Pb2+ cations extracted was determined by drawing off a portion of the receiving phase, evaporating the organic solvent under a gentle stream of nitrogen, and replacing the evaporated solvent with an equal volume of water. These samples were then analyzed by Inductively Coupled Plasma (ICP) Spectrophotometry. The final concentration of lead in the organic phase of the 2,4 pentanedione system was 5.7 mM, indicating that at equilibrium, nearly 60% Of the DC 18C6 molecules were hound to Pb2+ cations In the glutaronitrile system, lead concentrations of 7.8 mM were reached, suggesting that nearly 80% of the DC18C6 molecules were bound to Pb2+ cations. The Kex values for these two systems were determined to be 18.4 and 24.5 respectively, which is considerably higher than values determined for other traditional systems. 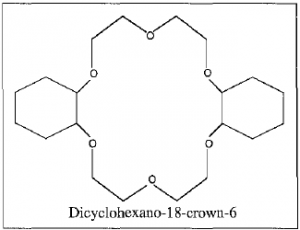 The success of these two systems in extracting Pb2+ cations into the organic phase can be attributed to at least two factors. First, the two solvents are dissimilar enough to keep the macrocycle in the organic phase and prevent loss of one liquid in the other. Perhaps more importantly, both organic solvents contain lone electron pairs which can help solvate the cations and bring them into the organic phase, much as the lone electron pairs of the DC18C6 molecules do. As such, solvent and extractant work together to extract the cation from the aqueous solution.

Another great advantage of the coalescence systems under study is that they require less time to perform the extraction process than systems which require shaking. The experiments described above were repeated with the substitution of shaking with a Burrell Wrist-action Shaker instead of heating. In the 2,4-pentanedione system, eight minutes of shaking are required to achieve complete extraction, and in the glutaronitrile system at least 15 minutes are required. With the coalescence procedures, complete extraction occurs almost instantly because the macrocyclic extractant is brought into intimate contact with the target cation while the two liquids are homogeneously mixed. Extraction does not have to take place across a small liquid-liquid interface.

Unanswered questions still remain, and this research will continue under other funding; but the research already performed suggests that coalescence extraction offers the benefits of high extraction efficiency and decreased process time. This method should find practical application in a variety of settings, especially when the source stream is already at elevated temperatures or when extraction must occur in a pipe, down a well, or anywhere where shaking is not feasible, but heating is. In any of these applications, or even in simple laboratory extraction experiments, coalescence is a viable alternative to traditional shaken extraction systems.