Seizures are a disease that inflict millions with no reliable treatment or cure. One of the main difficulties behind treating seizures is the uncertainty behind the cause. In previous studies we performed we found that connexin-36 (Cx36) knockout (KO) mice may respond differently to stimuli that illicit seizures. From this we hoped to find evidence that gap junctions, specifically Cx36 in the hippocampus, played a role in seizures. 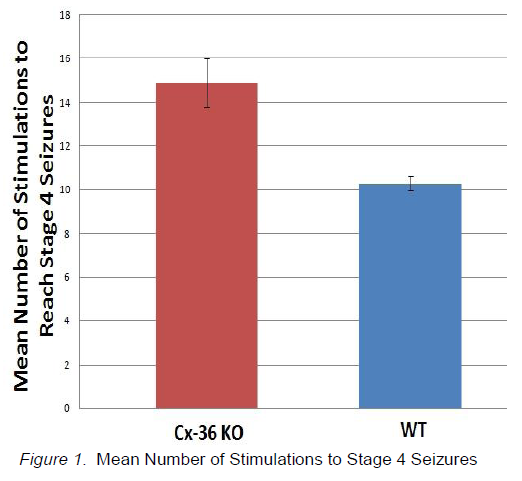 In behavioral studies we performed we found that it takes Cx36 KO mice a greater number of stimulations in order to reach a stage 4 seizure compared to wild-type mice. This was further demonstrated with in vivo studies measuring population spikes.

In our study, to substantiate the findings we found in our behavioral and in vivo studies, we wanted to add in vitro data to support the other data and provide a more comprehensive study.
Using a calcium dye, the cells in the hippocampus would glow under fluorescent light. With increased activity from an electrical stimulation, we expected that the cells would glow brighter. From prior knowledge, we knew that after cellular activity recovery would be exhibited and the cells would return to the original brightness. We hypothesized that the dye would show that the cells would gradually have an inhibited recovery. Then when comparing Cx36 KO mice from wild type mice we predicted that the KO mice would exhibit a more consistent recovery for longer recordings. 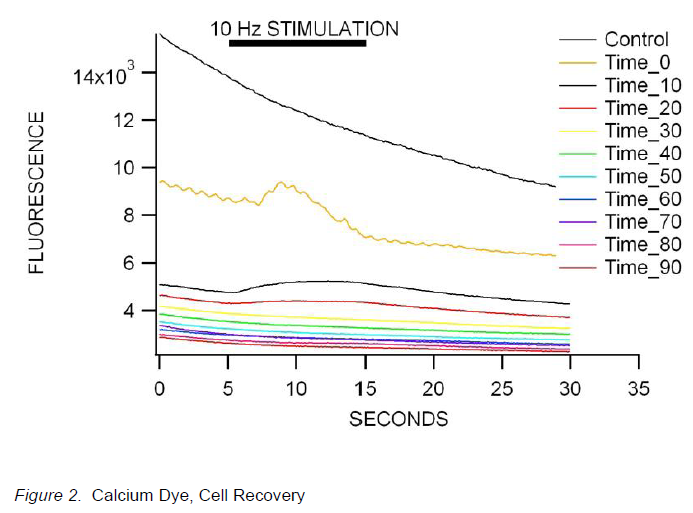 Unfortunately our data was inconsistent at best. We struggled to find a reliable recipe for mixing the dye we used to stain the cells in the hippocampus. One of the main issues was that the dye would clog in the pipette we would use to administer it to the cells. Consequently, the dye was ineffective and prevented data from being acquired. For several months we worked on methods to improve the solution of our dye, but to no avail. As seen in the figure above, we achieved some promising results; however, they did not endure an experiment, which would show us evidence of seizure like activity in cells. After months of attempting experiments and different strategies, the costs and troubles began to be too high. In the end, we decided as a committee that it would be best to improve upon the results we previously had in order to strengthen the research.

Despite the struggles, I was fortunate to present the research we had accomplished on a poster at the Fulton Mentored Research Conference in April 2012 and won first place in the category of Neuroscience. Additionally, we are currently working on publishing an article and plan to submit it to Hippocampus.

Furthermore, I was able to gain valuable experience as an undergraduate in the research process and was able to become more involved Dr. Scott Steffensen’s lab and contribute to other research projects that are currently progressing. Through the ORCA grant I was able to receive, I learned how to develop a research idea, write a proposal, and to carry out the research. Additionally, I learned about troubleshooting and the difficulties that may arise. While this project may not have seen any immediate success, it allowed me become involved in the research process and led me to other research opportunities.